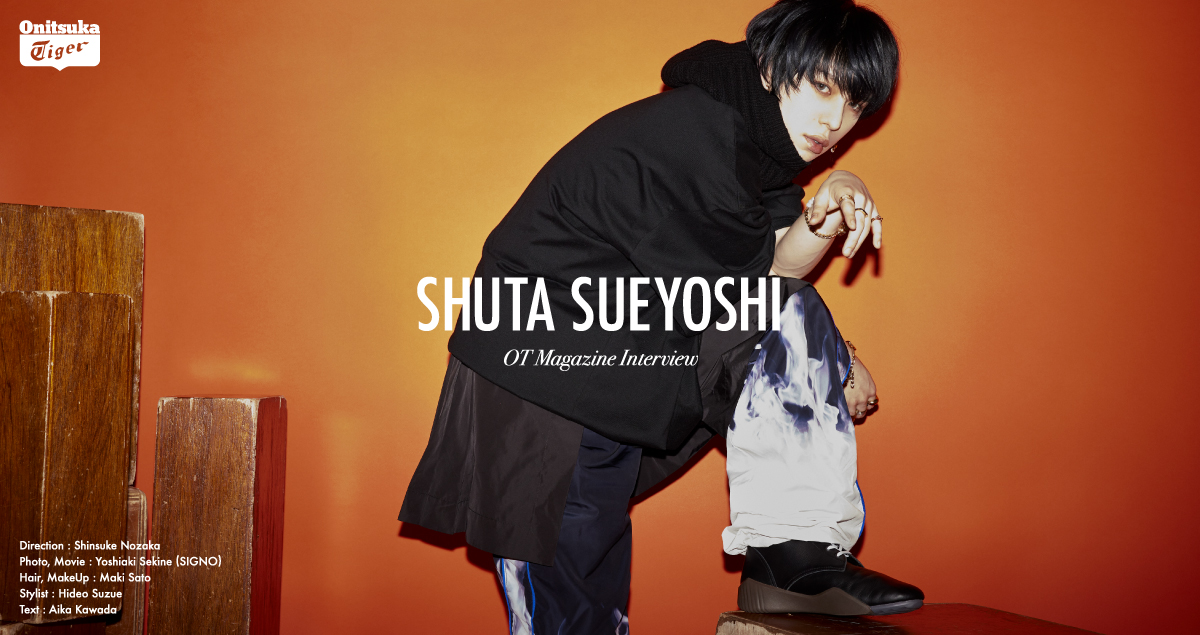 His Mind is the Drive Behind His Work:
Routine Gives Rise to Moments of Expression

Through dancing, singing, and writing lyrics, Shuta Sueyoshi is an artist who beguiles his audience. He can change his appearance from a richly colored style to a dark and sensual one, and expresses himself freely and in versatile ways. I asked him what he is particular about with his stage shows and his aspirations for them. I also asked him about what his interests were as a child and what challenges he wants to undertake henceforth.

He is also exerting his creativity as a singer, dancer, and fashion designer. What kind of childhood did he have that led him to pursue such a range of activities? What absorbed his attention as a child? “I liked to be physically active. I was good at sports such as cycling. I also liked to skateboard and surf. I would go to the nearby park and skateboard with friends. I learned about street dancing when I encountered a dance group there. I was completely fascinated by their dancing and their acrobatic moves, so I practiced imitating them in my room.”

He began to take an interest in fashion when he moved to Tokyo at the age of 17. He picked up various fashion magazines, absorbing information like a sponge. “I would find details and designs that I liked and over time I developed an eye for the kind of garb that I like. Before I came to Tokyo I was a surfer and wore surfing garb. When I was dancing, I wore street dancing garb. My fashion tastes change depending on what I am interested in at the time and my lifestyle.” 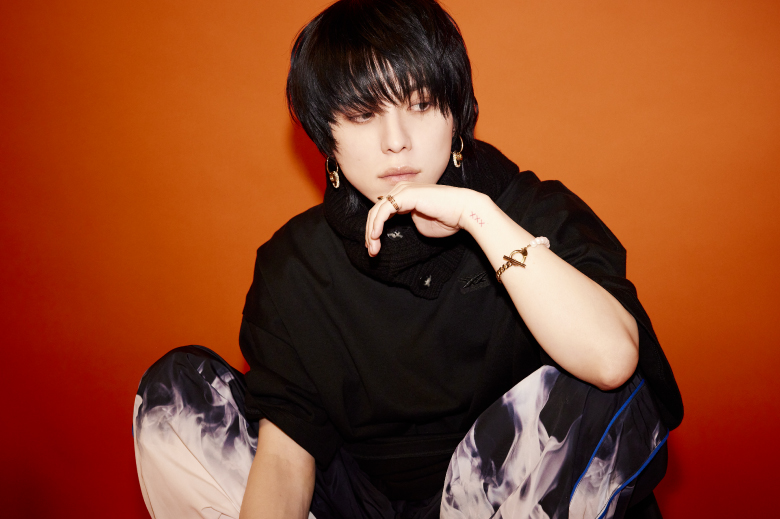 For Look 2, Shuta Sueyoshi-san wears an outfit with flame-patterned pants as the principal item. The gum sole short boots make for an accent. “The nylon track pants are new for me, and pairing it with this top was an unexpected discovery for me. The top itself is a simple design, and the form is very clean. It can be coordinated with any kind of bottom pant. These items are tastefully designed so they can be coordinated well I believe.”

Wearing Onitsuka Tiger garb was a first for Sueyoshi-san, but he has been a devoted fanatic of their shoes for a long time. He often wears OT shoes for stage shows. “They are easy to dance in especially if I am doing hip-hop on stage. When I wear slacks with an adult feel, I can’t dance wearing hard leather shoes. As I put on numerous shows back to back, I can’t afford to hurt my feet. Onitsuka Tiger shoes are soft and light. When I first put some on I thought, ‘Ah!…I can dance to my heart’s content in these sneakers!’” 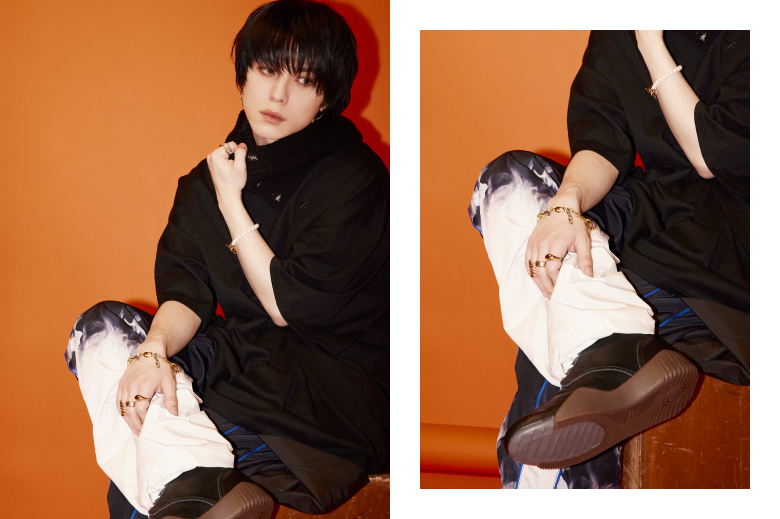 A DVD of the last show of his tour “Shuta Sueyoshi LIVE TOUR 2020 — prêt-à-porter” will be released this year. Our conversation surrounding stage costumes brings to mind the faces of the dancers and singers. On stage, the performance is primary. As an aesthetic world is created by everyone involved, the garb is set by consulting the wardrobe artist. While fashionability is important, priority is placed on ease of movement and singing for the performers.

I asked him if he has any golden rules on going about his music work. “I try not to create rules or limits on how I express myself. I develop my ideas freely, and whatever I like now and feel is good I feed in to my work. I believe that we build our character on the experience that we accumulate bit by bit each day. After having taken a certain approach, I may later think about changing my approach just a little. I try to enjoy what will be produced when experience coincides with evolving.” The same can be said for his body motion in front of the camera today.

To elevate his capacity to express and create, there are things that he does on a daily basis. “I try to see things from a different angle. For example, if there is scenery comprising sunlight, a waterfall, and a forest, I try focusing on one of these elements at a time to see how my appreciation of the scenery will change. Then I try to imagine the different ways I can capture the scene depending on whether I take still shots with a camera or if I shoot a video. I also like going to art galleries and whatever I see, I think about how I would have rendered the same piece.” He is an artist through and through. His mind is the drive behind his work. What has he seen and whom has he talked to in his life. As an artist, he is tasked with expressing in the moment that which is inspired from his own experience. 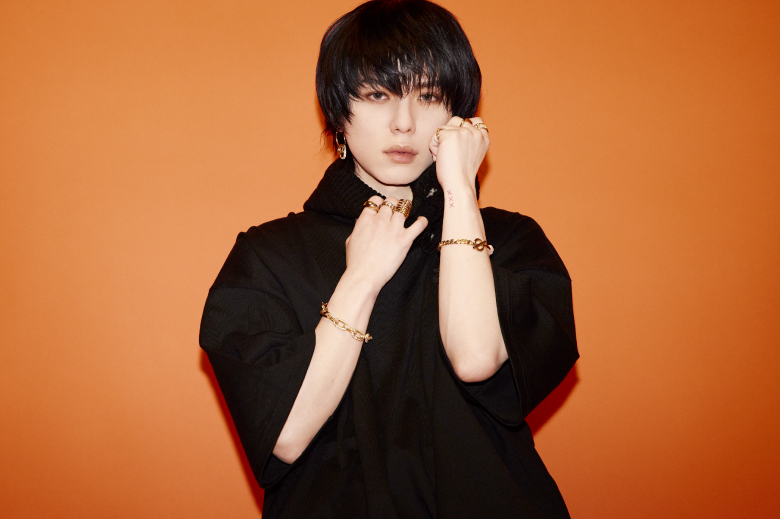 Finally, I asked this stoic person what he would like to try his hand at doing in the future. “If I can choose anything, I would say unlimited surfing. I am curious to know what it would feel like to ride an artificial wave for the longest time.” The surfing aficionado remains very much alive today! He also wants to try skydiving. His inclination to constantly seek something new percolates into his private life.

■PROFILE
He began his solo musical career in full swing from May 2017 together with the live streaming only release of his original songs “Switch,” “Sad Story,” and “to.ri.ca.go”. “Switch” attained the top place in iTunes song ranking in Japan, Taiwan, and Hong Kong. “Byoushin Re:Time” which was also released via live streaming in October 2017 also achieved the top spot in J-Pop ranking in Japan, Taiwan, and Hong Kong. He went on his first nationwide live tour with the 2018 release of his first album “JACK IN THE BOX”. The final show at the Japan Budokan was filmed and the “Shuta Sueyoshi LIVE TOUR 2018 – JACK IN THE BOX – NIPPON BUDOKAN” was ranked number one on the DVD charts.
He released his 2nd album “WONDER HACK” in 2019 and went on a nationwide live tour of the same album title. The final shows were performed at Makuhari Messe for two days. “HACK” a song from his 2nd album exceeded 100 million monthly playbacks on TikTok for May 2020, garnering him further repute.

Apart from his music work, he established an apparel brand Armillary and a YouTube channel where running commentaries of video games are updated.