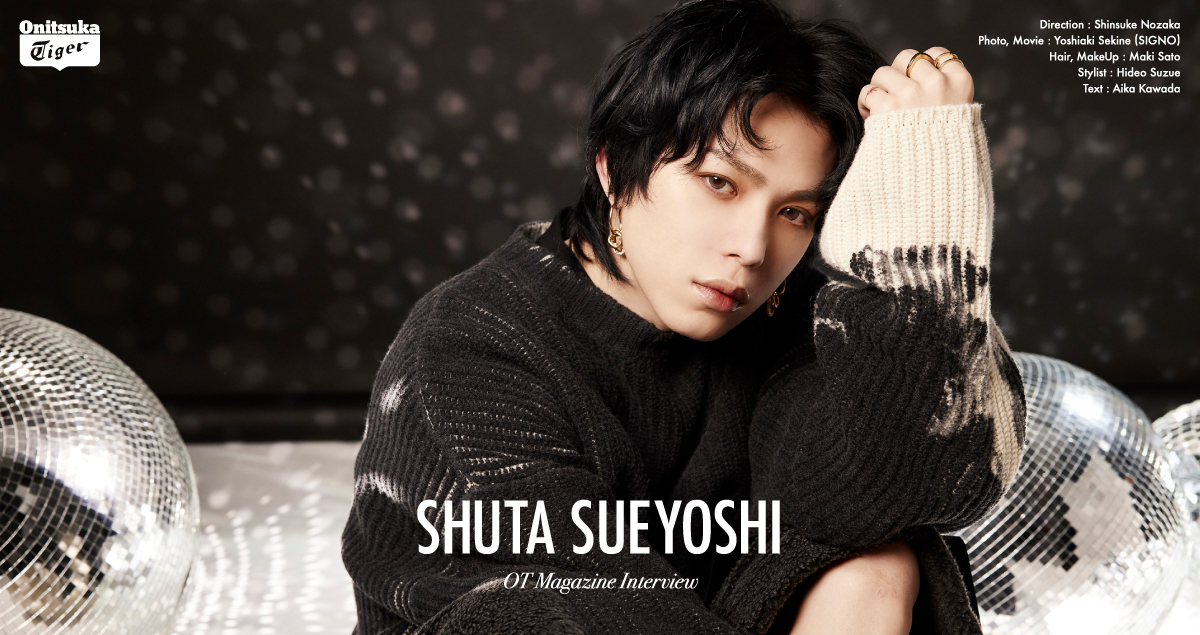 Inner liberty to play with the cloth:
Why he began his own label

Stitching together dance, music, and lyrics, Shuta Sueyoshi is an artist who casts a spell on those who watch. He can express himself in a variety of ways, changing from a richly colored to a dark and sensual form. He has established his own clothing label and sends seasonal collections out into the world. I asked him about his fashion sense.

For this photo shoot, Shuta Sueyoshi wears a knit with flame design with half pants. With this he wears a belt with skirt-like details. He strikes poses in front of the camera, improvising smooth and precise movements. “I love oversized items as they don’t make me feel constricted and are comfortable. I wear oversized stuff all the time. The sweater was sloped in the shoulders and there is a white fire design on black cloth which I thought was cool. Wearing it with matching pants would also be an idea.” 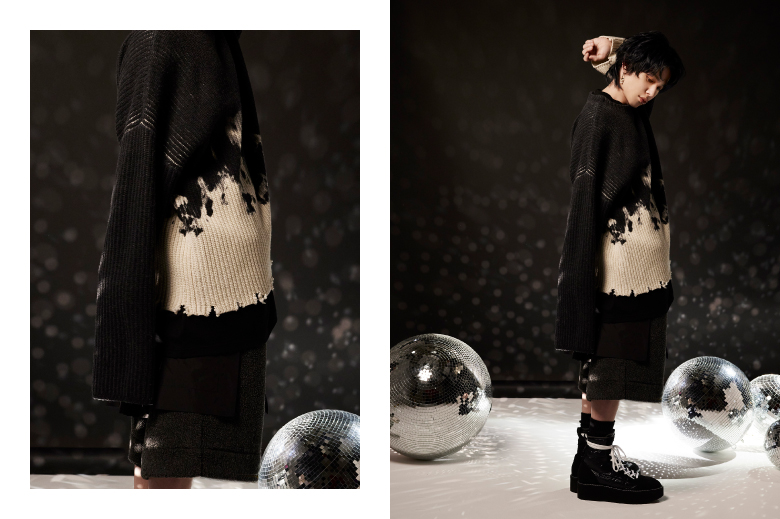 Sueyoshi is known for being big on fashion. When I asked him whether he was opposed to the details of the belt which seem to be a frill skirt motif, his eyes lit up and he quickly fell to talking shop. “Not at all (laughing). I was already wearing a skirt as part of my ordinary wear about eight years ago. It was a red checkered skirt that is held up with a bobby pin which I was very fond of. But it may have been too soon, so it didn’t take off. Apart from this, a trend in men wearing high heels had arrived in Japan and I thought it was interesting and tried it. Perhaps this was also too soon as it didn’t take off at all.” 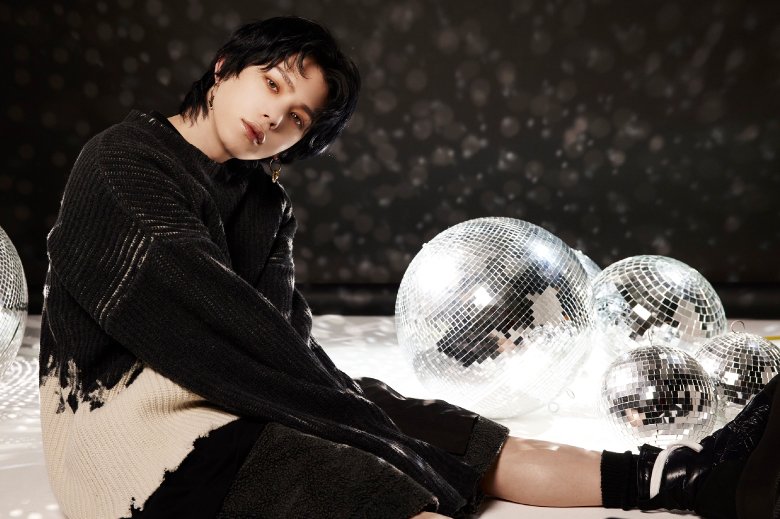 He is into what’s trendy. But he does not appropriate just whatever; he carefully chooses what suits his particular style. This is of course true where it applies to Armillary, a fashion brand where he is a designer. “I launched this label due to my love of fashion. I pursue craftsmanship not for my music fans, but for people who love clothing. Items that are simple but have good silhouettes, lower-body clothing that has been cut to make you look good, items which offer a wider potential for mixing and matching. I offer fun garb which affords new discoveries. To share in the feeling that ‘wearing garb is fun’ and ‘I love clothing’ with people who appreciate my stylistic sense and who are enthusiastic when they hold the material in hand, this would make me happy.”

His silver accessories add a unique sparkle to the garb. They stand out as part of an all black get up with a street-like, mode feel. They are items in his brand, fern sch bon. He had them on for the photo shoot and loves accessories and collects them. “The reason I launched an accessories brand is that in having fun with fashion, there were significantly far less accessory items available for men than for women. Accessories are indispensable to finish your own style. Trying out different things will broaden the possibilities of fashion and the fun in it, so I hope people develop more of an interest.” The garb and accessories having left his hands should be worn as you like freely. Of course, you should seek his advice for recommended stylings. 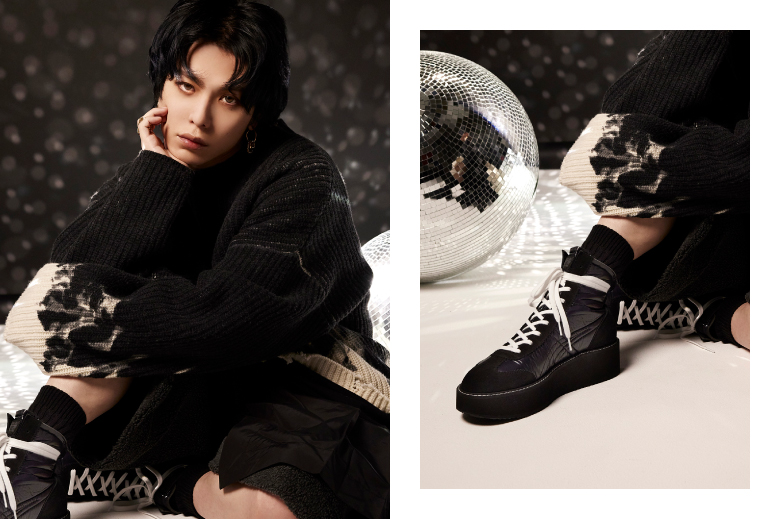 Did you encounter some difficulties in starting up a label? “Depending on the patterner who you work with, there will be major variances in the end product in terms of material finish and texture. There will always be divergence from the design you are proposing. Our job is to anticipate the fine-tuning and prepare for them well in advance. There are occasions when I request a certain patterner’s services after researching his or her idiosyncrasies and the characteristics of what they make. The garment made with the actual material may differ from what I had in mind, or conversely it may turn out better than expected. The things that you discover and learn in the process of making different wear are truly many.” 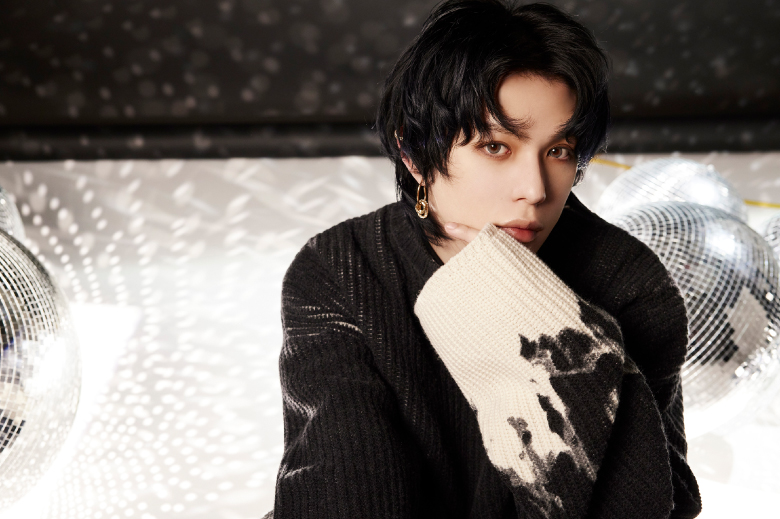 Finally, I asked him if he pays particular attention to anything with his ordinary garb. “The shape of the garb. I place high priority on whether the garb fits my body shape. This is also true of how the length feels. As you know yourself the best, I consider how I will look better when I arrange my ensemble. This is also true for my label. I am always renewing my designs each season through trial and error to improve the look of people who wear my garb.”

→ In look2 I asked Shuta Sueyoshi about his work as a musician and his outlook on the future.

■PROFILE
He began his solo musical career in full swing from May 2017 together with the live streaming only release of his original songs “Switch,” “Sad Story,” and “to.ri.ca.go”. “Switch” attained the top place in iTunes song ranking in Japan, Taiwan, and Hong Kong. “Byoushin Re:Time” which was also released via live streaming in October 2017 also achieved the top spot in J-Pop ranking in Japan, Taiwan, and Hong Kong. He went on his first nationwide live tour with the 2018 release of his first album “JACK IN THE BOX”. The final show at the Japan Budokan was filmed and the “Shuta Sueyoshi LIVE TOUR 2018 – JACK IN THE BOX – NIPPON BUDOKAN” was ranked number one on the DVD charts.
He released his 2nd album “WONDER HACK” in 2019 and went on a nationwide live tour of the same album title. The final shows were performed at Makuhari Messe for two days. “HACK” a song from his 2nd album exceeded 100 million monthly playbacks on TikTok for May 2020, garnering him further repute.

Apart from his music work, he established an apparel brand Armillary and a YouTube channel where running commentaries of video games are updated.