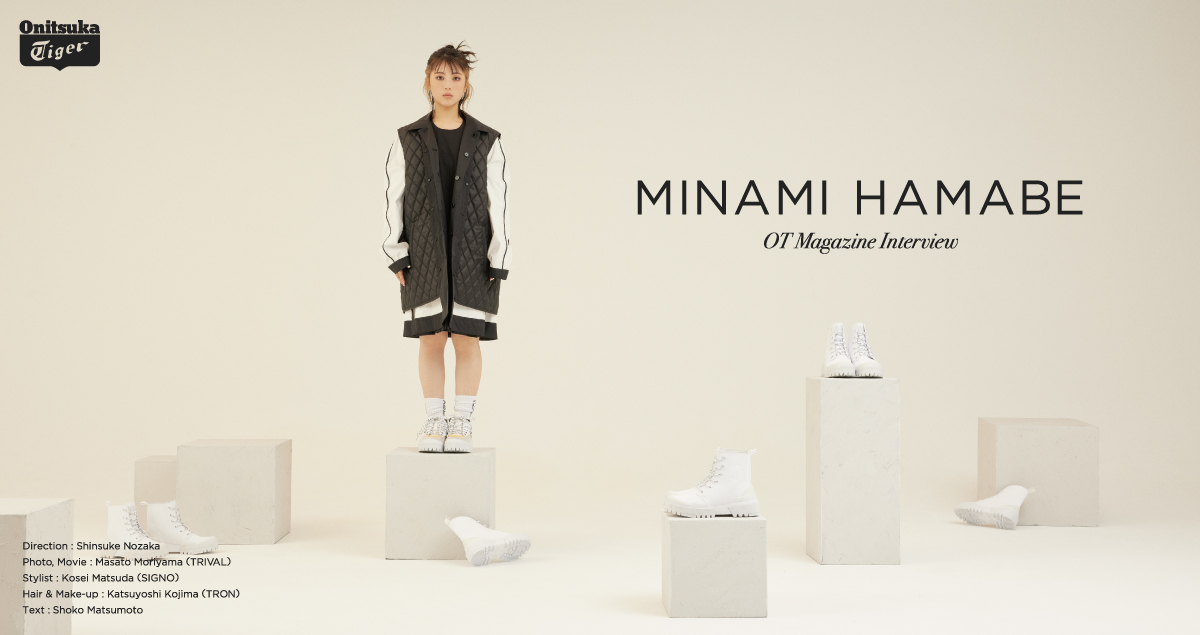 Ten years on, Minami Hamabe has been steadily and earnestly honing her craft and widening her range as an actor. I asked her about her fashion tastes and lifestyle, and her plans and outlook for the future. 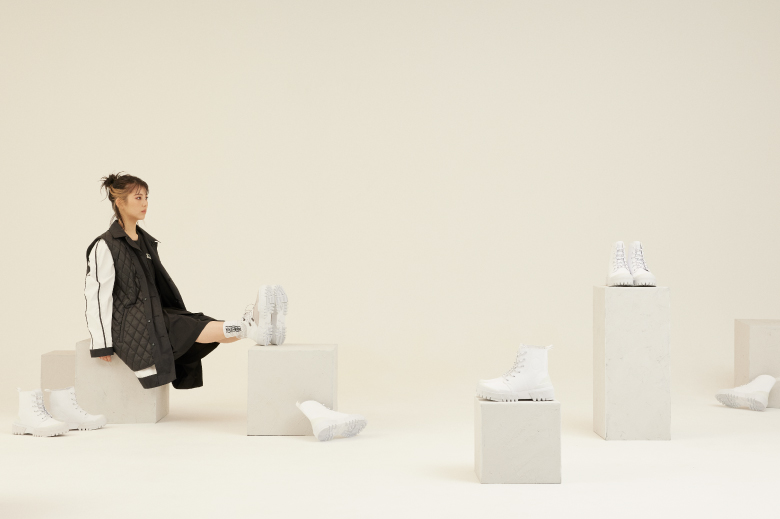 In a switch from the vivid style in LOOK 1, the mode mood for LOOK 2 is refreshing. Her hair and makeup were also arranged to look attractive with a monotone garb. The outer thrown on over the black one piece is a 2-Way. By wearing it reversed, the nuance of the quilting and the brand logo boldly stitched onto the back leave an impression. “I like to wear oversized clothes, so the outer garment hit the mark for me personally. You can wear it reverse-side-in and inside-out, and it is easy to mix and match. I hope to wear it for the fall and winter season. I had never tried to wear such bulky shoes before, but I was pleasantly surprised as they are much easier to wear than I imagined. I enjoyed sporting this style which was new to me. I also think they will go well with the long length skirts that I like. This ensemble is close to what I normally wear.” Chic colors such as black and white and grey dominate her wardrobe. “For some reason, I tend to choose black each time (laughs). I also prefer to wear loose clothes rather than tight fitting clothes that show my outline as loose clothes are easy to wear regardless of your mood.” 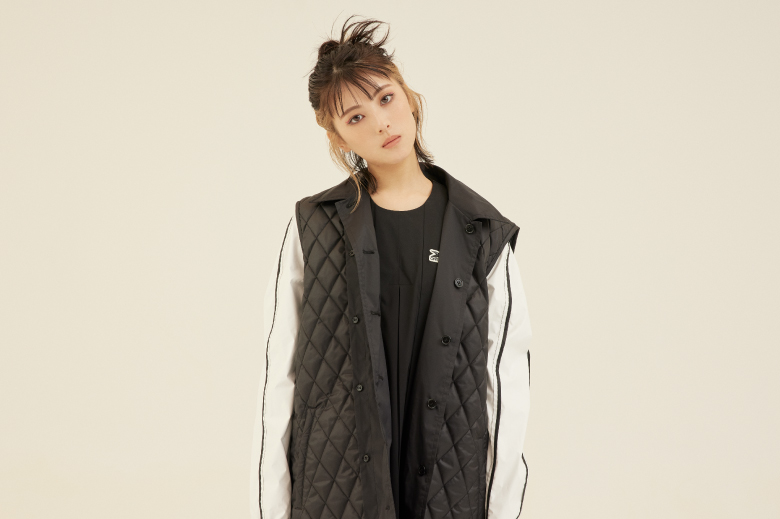 Hamabe describes herself as a private person and a routine junky. “I believe in following a routine to the point of being obsessive compulsive about it (laughs).” This is so that she can do her work in tip-top condition. “For example, this may involve drinking a certain supplement, going for a massage, or applying a compress to my shoulders (laughs). I need to follow a routine for a certain period of time and if I don’t, I won’t feel good or I will be worried the next day.” 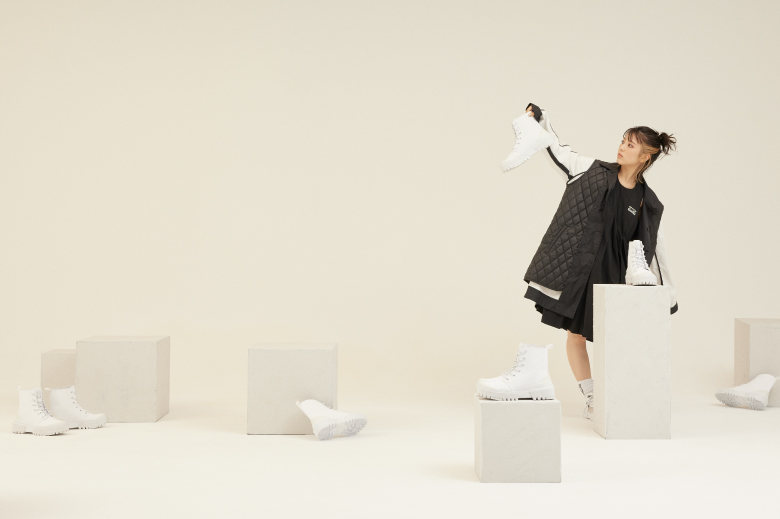 At the time of the photo shoot, Hamabe was not otherwise engaged in a film or TV show. She had been taking a breather by getting a new hairstyle and reading her favorite books. “Late at night, I like to lie on the sofa or bed and read. In the past, I would read books recommended by my mother or books by her favorite authors. But in seeking out my own preferences, I encountered the works of Fuminori Nakamura. His books are heavy as they depict the backside of humans, but I become engrossed in them.” She also watches this season’s TV dramas and watches film on a video streaming service. 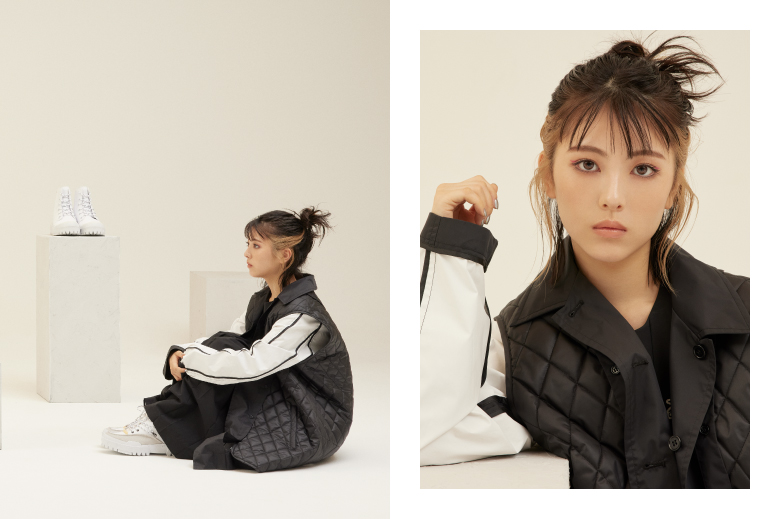 Hamabe has been devoted to her work for ten years now and there are great expectations for her future endeavors. I asked her about her outlook for the future. “While I do have an abstract idea of where I would like to be ten years from now, I am also anxious about my position if I were to accomplish those goals. I try not to set goals for the near future whether they are work-related or private. I am happy if I can put my best foot forward with the people I work with and the opportunities I am afforded. If I do have a major goal in my life, it is to get a hold of a down-to-earth kind of happiness with a smile on my face and without overtaxing myself.” While still just 20 years old, she has already had a ten year career as an actor. 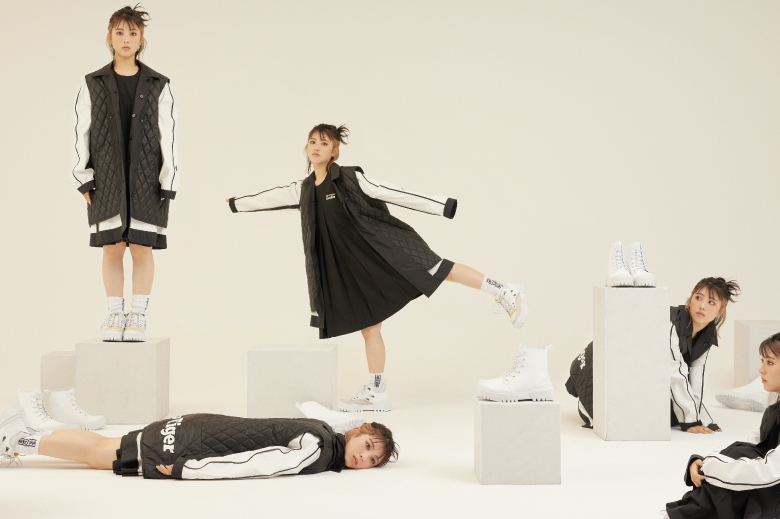 Recipient of the New Generation Award at the 7th Toho Cinderella auditions in 2011. She has since appeared in numerous film and television shows. A new film “Kakegurui: Zettai Zetsumei Russian Roulette” is now playing from June 1.