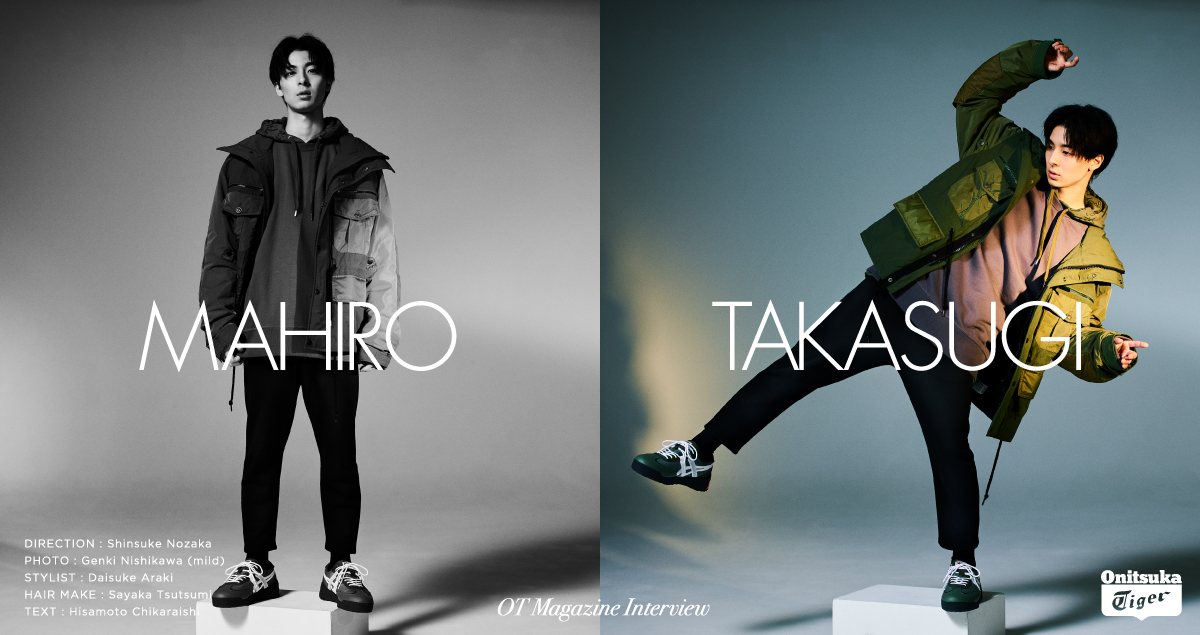 Pursuing what interests me.
Becoming passionate about something is what drives me!

After the photo shoot, Takasugi reverts back to his usual smiling self remarking, “fashion shoots make me tense, but they are a lot of fun!” A strong actor who is all business when standing in front of the camera, he is affable when relaxing. He is solemn and soft. I asked him about his private life. 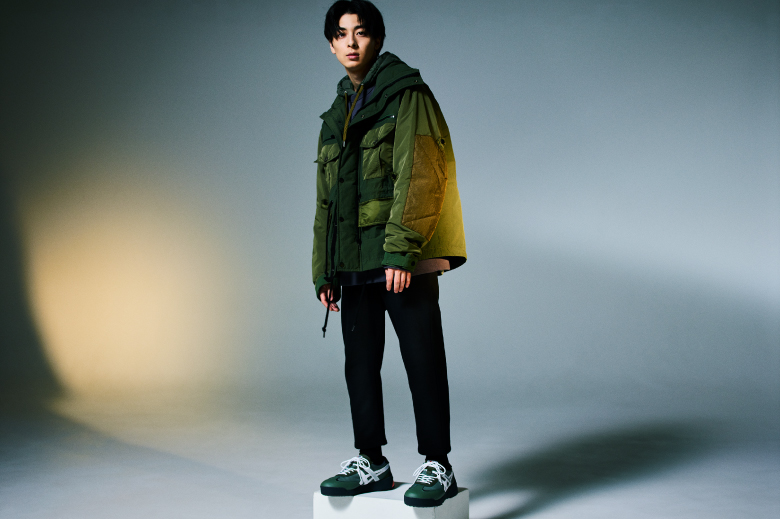 He plucks himself up when going out.
An adult style is his mode.

In contrast to the colorful look in the 1st photo shoot, for look.2 Takasugi wears layers consisting of a jacket and sweat hoodie in a basic tone of smart khaki. Pleased with it, he remarks, “a baggy silhouette that hides my profile is closest to my normal wear.”
“I prefer streetwear that is over-sized. For look.2, I liked the balance between the loose tops and the tapered bottoms. The purple top goes well between a sober khaki jacket and sweat hoodie. If you are dressing warmly by layering, it is fun to play around with colors and arrange your ensemble.” 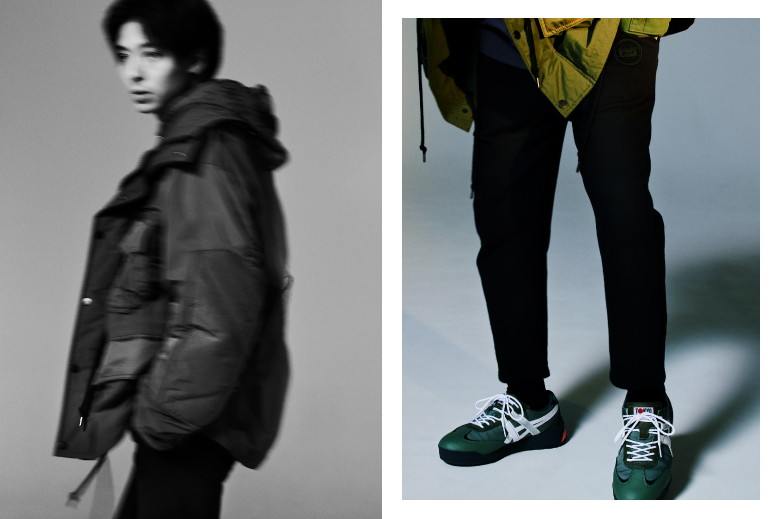 Takasugi explains that he particularly likes sneakers among fashion items. The sneakers he wears for this shoot are the accent.
“Although I cannot say that I am a collector, I do collect shoes from time to time. As the photo shoots were orchestrated to highlight the outfits, simple sneakers were chosen to go with them. But I am curious about the shoes because they are cute, so will drop by a store next time for a better look!”

When I asked him about his recent inclinations in fashion and styles he would want to try out, he said he is shifting to an adult look with his dress style.
“I move around a lot on days that I work so I dress in a relaxed fashion. But the time I spend at home has increased as of late, so I tend to want to dress well when I do go out. Before I would wear mainly jeans, but I may now often wear slacks, which would want to make me collect a few cardigans. While I have only worn a military jacket for a role I once played, seeing the photos from the photo shoot made me think, ‘Oh, this may suit me after all!’ This photo shoot was a lot of fun as there were many clothing items that were new to me.” 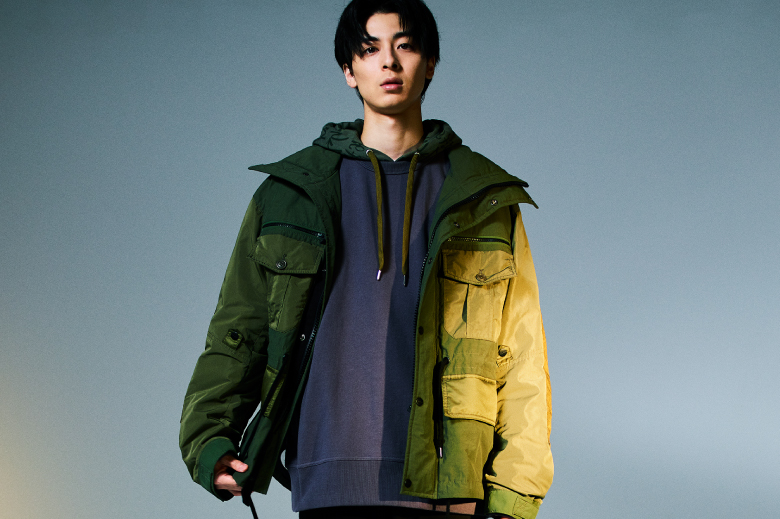 Lately he has started thinking more about the importance of spending time outside and how to enjoy himself. He is interested in activities that he can pursue in the great outdoors.
“I want to try my hand at river fishing and have been talking with a friend about doing this since last year. I haven’t been able to find the time, but now that it’s become colder, we are now talking about doing it next year (laughs). I have started thinking it would be nice to sit in nature and wait for fish to bite. It’s time to start thinking about making some leisure time just for yourself. In the interim, I am enjoying my at-home hobbies like reading manga, watching anime, and playing video games.” 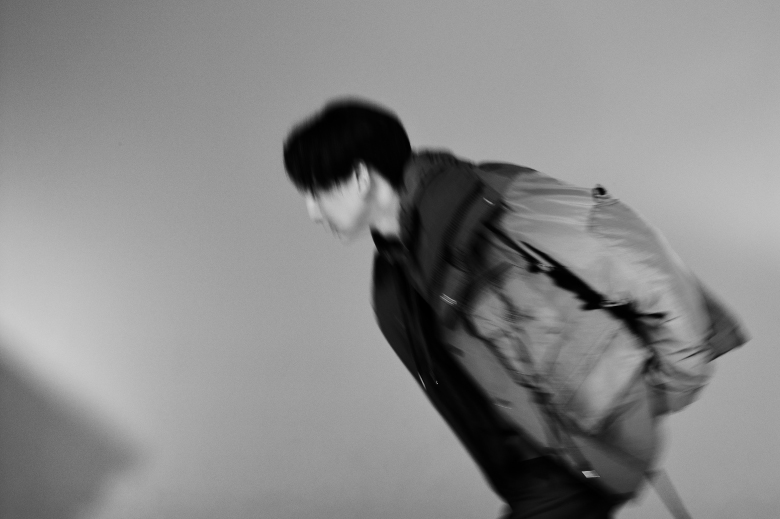 Having become an actor,
I now want to play people that inspire me

“When I find something that interests me, I get really excited and feel happy. For example, if a manga grabs my attention, I am like ‘wow!’ — I just stand up and don’t put it down (laughs). What I am recommending to people now is a manga called “Shadow House.” It is a story about a shadow family with no face and living dolls who serve them and act as their front. As the shadow family has no face, their faces are blotted out in black and you can’t read their facial expressions. But you can nevertheless read their feelings from the distinctive devices used in this manga. And if you can’t read their feelings from their expressions you are left to wonder, ‘what was implied by those words and actions?’ It also has elements of suspense and mystery and I can’t put it down.” 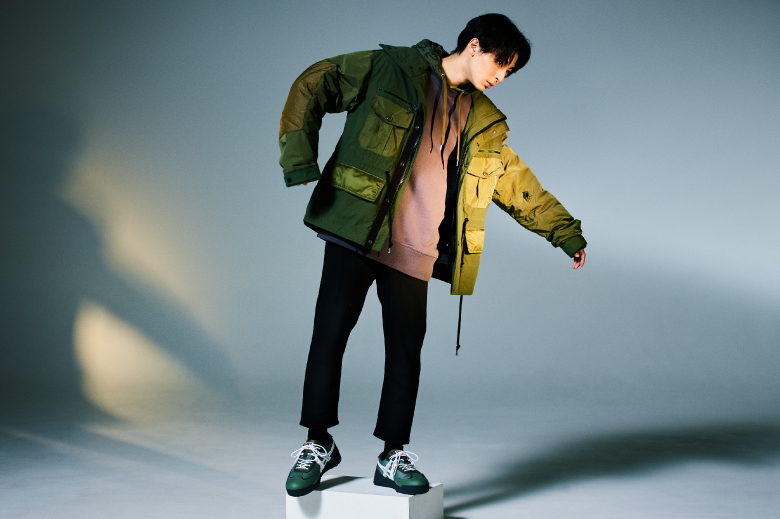 Takasugi beams as he talks about the real him. It is the same enthusiasm as when he talked to me the last time about preparing for a role. Becoming passionate about something, discovering something that absorbs your interest will make you an interesting person. This is true whether it is fashion, play, or work. Finally, I asked him about what he is passionate about.
“Recently, the number of student roles has decreased a lot, and adult roles with jobs and titles have increased. When I was a child, I wanted to become a rescue team member or a kindergarten teacher. Being part of a rescue team would be a fulfilling job as it affords you opportunities to save people’s lives. My reason for wanting to become a kindergarten teacher was simply because I had two younger brothers and I like kids. As the range of roles I can now play has widened, there may be opportunities for me to play people in these professions in the near future. But for now, I will continue to hone my craft by acting in various works.”

Born July 4, 1996 in Fukuoka Prefecture, Takasugi began his career as an actor after being scouted in 2008. In 2013, he took on the role of Mitsuzane Kureshima and his alter-ego Kamen Rider Ryugen in the TV program “Kamen Rider Gaim.” His performance in the film “Bon and Rin-chan” released in 2014 was highly appraised and he received the Best New Actor award at the 36th Yokohama Film Festival. He later appeared in numerous noteworthy works which include film, TV drama, and stage. Some of his recent works include the NHK drama “Fraud Detective,” the Nippon TV drama “Something is wrong with us,” and the films “Maeda Construction Fantasy Marketing Department” and “Thread.” In the future, he will appear in the stage play “Teni amaru” (playing a subordinate) which will begin December 19, and in “Kakegurui Part 2 (temporary name)” scheduled for release next year.