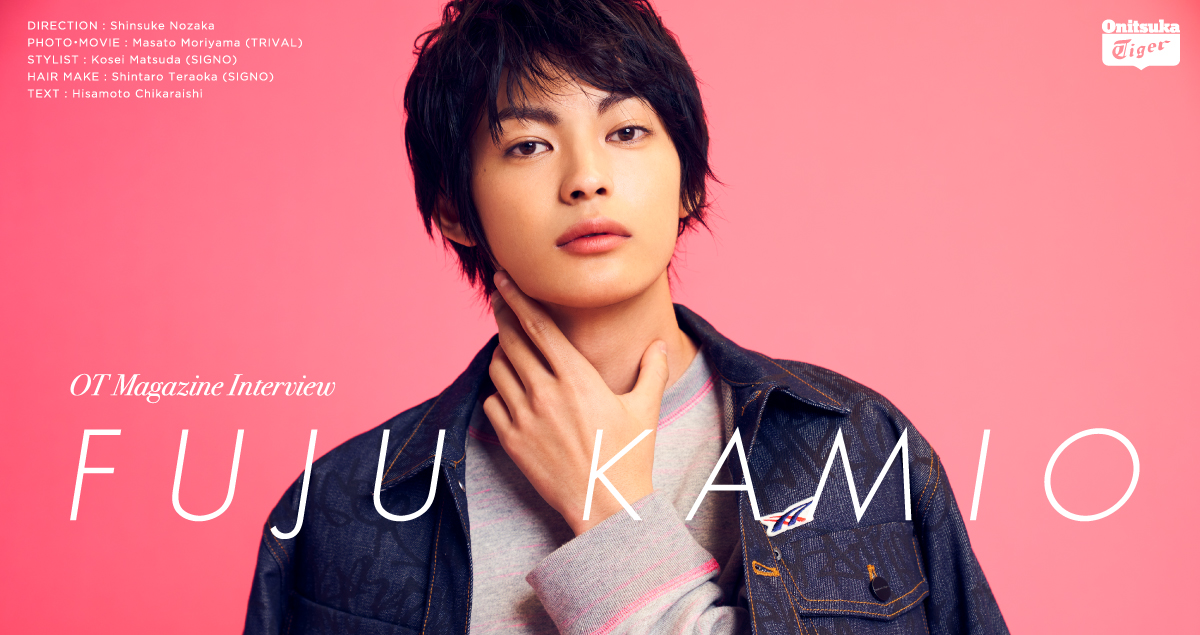 There is a heavy amount of rivalry among the many talented, up-and-coming young actors in show business today. 21 year old Fuju Kamio has a cool demeanor and adult-like charisma. He began his work as an actor after graduating from high school and has been steadily building his career, playing lead roles in much-discussed film and TV shows. We asked him about the growing appeal of his sense of fashion and his acting work. 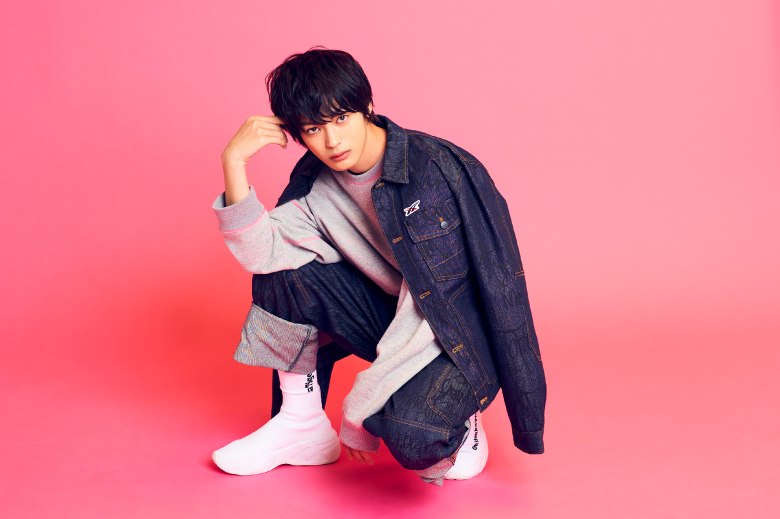 “For my ordinary clothes, I wear mostly black. As my job requires me to change my clothes a lot, I often choose clothes that give me a loose fitting silhouette that are easy to take on and off. The sweatshirt is a standard item for me that I often wear. The look.1 denim top and pants is a fresh look for me and I learned something new.”
He tries to proactively adopt new sensibilities each time he is introduced to something new.
“If I wear it as an ensemble, just throwing the jacket over my shoulders makes me look like I wear it well. This is a look that I haven’t tried before. For look.1, I wore highcut knit sneakers which fit to the feet and are refreshingly suited to the denim, and they were also very comfortable. I myself don’t own white sneakers. They look attractive with navy and black, and I want a pair for my personal use.”

He does not shirk from challenges, but rather enjoys taking them on. To understand the source of Kamio’s proactive attitude, we must look back to before the audition which led to his debut in show business.
“I had been playing soccer for ten years and when I stopped playing after graduating from high school, I lost something at the core of who I am and I felt empty. So I wanted to start something new, something no one else was doing, and auditioned for a talent agency. I started out not knowing anything about the job of acting, and steadily learned on the job. I am now at the point where I am challenging myself to see how much of myself I can express through my acting, so I am proud of myself when I think about how far I have come. Taking on the next challenge is what motivates me.” 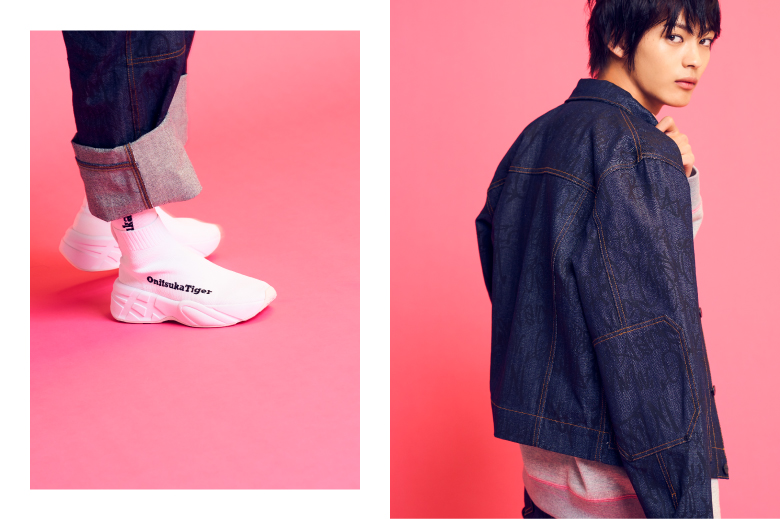 He is passionate about constantly improving himself, which suggests he has great potential for growth as a person and as an actor. He discovered this about himself on a certain film shoot.
“One of the highpoints in my acting career was playing a lead role. As a main character in the storyline, I was placed in a position of having to involve the supporting cast members and pull them along, although this was not a conscious choice. On reflection, it was a very enjoyable experience and I felt a great a sense of accomplishment. Having played a lead role has made me more responsible toward my role and other people’s roles, and I have gotten to observe the staff members who create the set and closely communicate with them. In the past, I thought all I had to do was go to a prepared set and give a good performance. Playing a lead role made me aware that a great many people are involved in creating a single scene.” 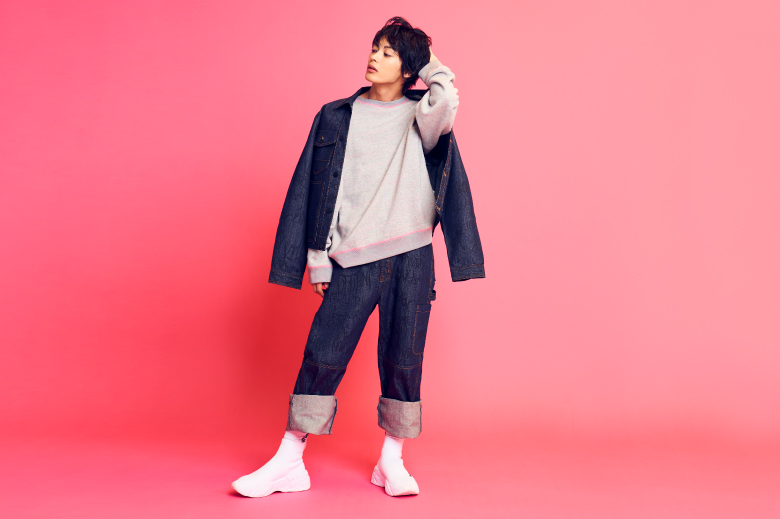 You behavior changes if your appearance changes:
Broadening the scope of his acting skills with each new role

The lead role is not a part that just anyone can pull off. You must have a certain charisma. He has appeared in numerous TV dramas and films since last year and has signed onto TV shows that have yet to start shooting. We asked him about his strengths.
“I am very glad that I have been able to appear in a variety of TV shows and films. What are my strengths? I am often told that my impression and mood changes depending on my hairstyle and clothing. For example, combing my bangs back gives me a more adult-like look. Moreover, how I get into a role changes depending on my hairstyle and clothing, so this may be an asset.”

Kamio plays completely different characters as Tsutomu Harashima in the film “Secret SNS Account” to be released on June 12, and as Yusuke Igarashi in the film “Kiss Him, Not Me” to be released on July 10. His acting is exceptional. Kamio himself enjoyed playing these characters.
“Most of the characters I have played thus far have had an idiosyncrasy or a shady nature, but the character of Yusuke who I play in ‘Kiss Him, Not Me’ is a refreshing boy in high school. It is a love comedy about the main character who is a dyke who likes to read comic books about gay sex. When she becomes slim, she suddenly becomes popular with the boys and Yusuke is one of the boys who becomes interested in her. I was able to enjoy acting in a high school love drama with a fresh mindset. On the other hand, Tsutomu in the film “Secret SNS Account” meets an older woman who starts keeping a secret SNS account. I had some big challenges including some adult scenes. The release dates of both films are drawing close. It would be nice if people can get a sense of my acting range from these two films.” 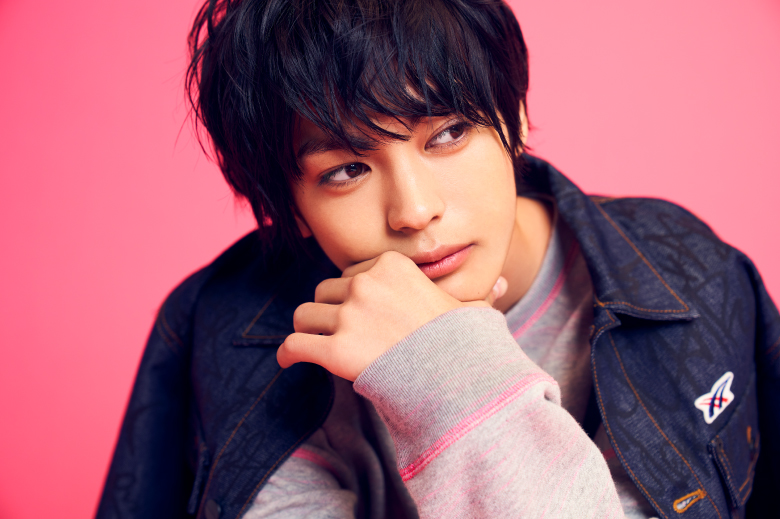 When asked about future roles he would like to play and the kind of work he would like to appear in, he immediately responded “professionals.”
“I would like to peer into worlds that you would normally not be able to know about. Perhaps a policeman or judge. I think it would be difficult as I would have lines with specialty language, but I like to challenge myself by taking on new things. I think it will help me grow as an actor.”

→The look.2 interview to be released in April will delve deeper into his private life such as what fashion he would like to wear this Spring and how he spends his days off.

He was born on January 21, 1999 in Tokyo. After graduating from high school, he auditioned for a talent agency and began his career in show business. He made his acting debut in 2015 appearing in a TV drama and has since appeared in a number of films and stage plays. In the TV drama “EREN THE SOUTHPAW” which aired in 2019, he generated a lot of buzz as the main character Koichi Asakura. Apart from appearing in the now airing “Trapped in the Box” (TV Asahi), he will appear in the TV drama “Liked! Hikarugenji-kun” (NHK G) to be aired in April, the film “Secret SNS Account” for release on June 12, and the film “Kiss Him, Not Me” to be released on July 10.  His 1st Photo Collection “Continue” (Wani Books) is being favorably received and went on sale on his 21st birthday.