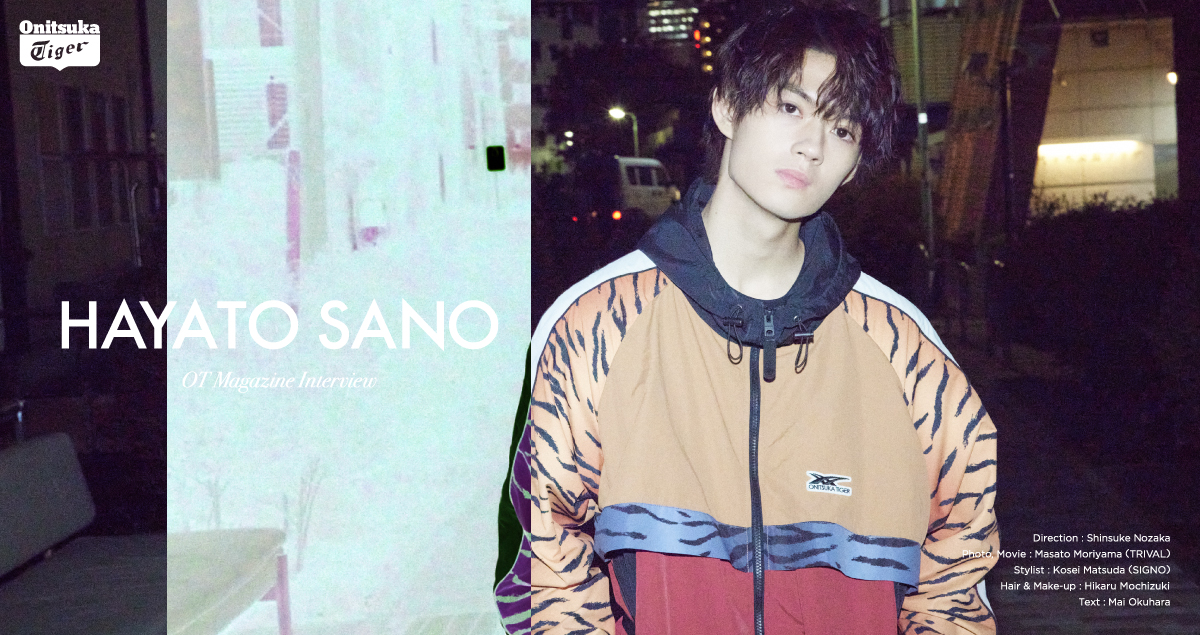 Setting big goals with worldwide aspirations
while making progress each day as an actor and member of vocal dance unit M!LK

Hayato Sano is active not only as an actor but as a member of the dance vocal unit M!LK. I asked him primarily about himself in LOOK 1; in LOOK 2 I asked him about how he balances his acting and musical work, and his future aspira-tions.

In contrast to LOOK 1 which is a cool, adult two-piece set, LOOK 2 has Hayato in a sporty style worthy of Onitsuka Tiger. To match a basic sneaker are a slim leg pants offset by a voluminous donkey jacket. “At first sight, the donkey jacket is loose across the waist but the silhouette can be adjusted by tightening the hem. Giving variety to the garb by creating a sense of modulation is something I want to try in my everyday gear. This style is perfect for dance lessons. It would be cool to dance in this set-up.” 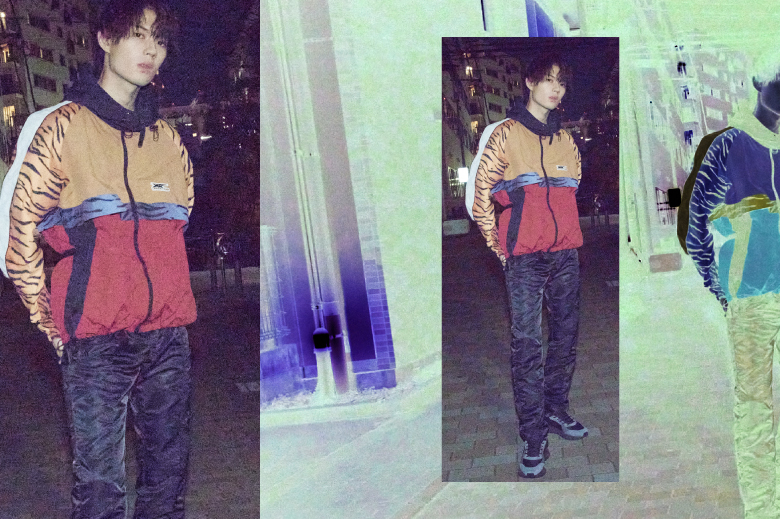 When Hayato was a student and went to Tokyo on an errand, his father called him up and told him to pay a visit to the studio where he just happened to meet his future M!LK band members! If it hadn’t been for his father telling him to go, he wouldn’t have met them. “My work as a M!LK band member is a major motive force in my life. If I was just an actor, I don’t know that I would have been so committed because the responsibility for the work is not just on me; my making a blunder will impact the other band members. If I know that I am responsible for the lives of four other people, this naturally becomes a source of motivation. I will give that extra effort to overcome difficulties.” 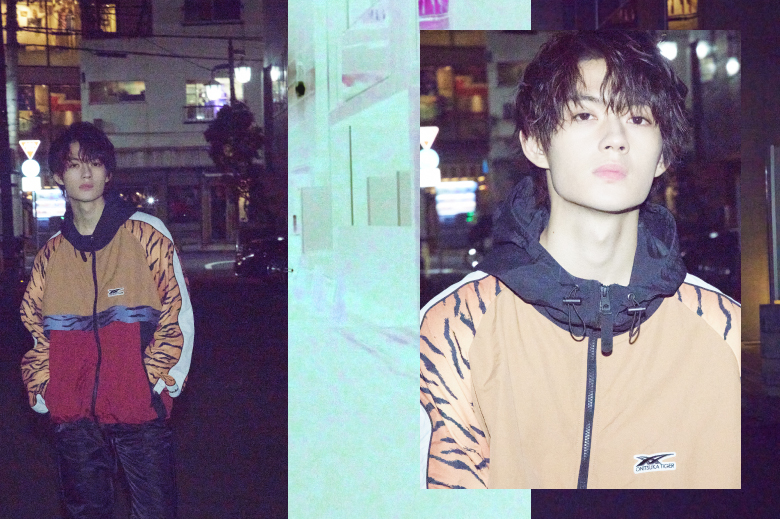 He has no sense that he is flipping a switch when he performs with M!LK and then takes on an acting gig; rather he makes minor adjustments according to the situation or person. “Rather than playing big, I think about how to conduct my-self depending on the person or situation. I think about what I should do to make things run well. I read the air, but as a result may end up reading too much into it. In this sense, my work as a M!LK band member is different from my work as an actor. Having said that, however, I play a different person with each new gig. But my role with M!LK doesn’t change, so this allows me to get spoilt a little, and there is a certain warmth.”

In the film “Usogui” for release in February, he plays a young man Takaomi Kaji whose life is turned upside down when he befriends genius gambler Usogui played by Ryusei Yokohama. He teamed up with Yokohama to deliver a fine per-formance although he had some trouble with some expressions used in a surreal gambling world. “The character that I play, Kaji, is a young man in his 20’s who works part-time trying to pay off debt. He bemoans his life which isn’t going very well. He meets Baku Madarame played by Yokohama and is drawn by his cha-risma and becomes his buddy. I spent time with Yokohama-san during tea breaks and after a shoot and we talked about many things and built up trust. This helped me create my role as someone who gradually becomes his pal, and allowed me to ad lib. While the plot is thrilling, my character was fun to play.” 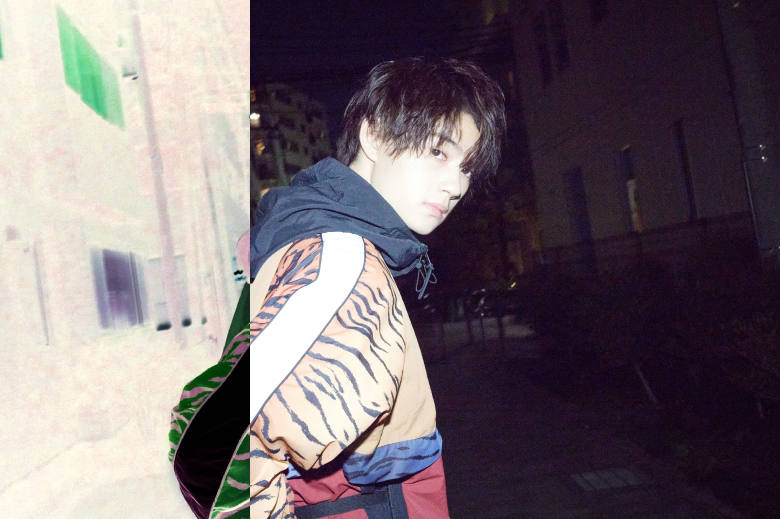 He would like to be able to speak English one day and work abroad. Dream big — this is his motto. “I try to verbalize my goals and dreams as though giving an in-cantation. This way, I can put pressure on myself in a good way. I first set a big goal, then observe smaller goals along the way.”
He feels fortunate to have appeared in numerous TV dramas and film in 2021. “It was not a bad year as I began to make new inroads. I hope to make 2022 into a year in which the seeds that were sown last year will take root. While things are difficult now, I hope to go abroad when the pandemic settles down. I want to test myself to see if my studies have paid off. And I hope to work abroad someday too. If I can speak English, I can potentially communicate with 1.7 billion people ra-ther than just 100 million. I would be tremendously fortunate if I was able to work around the world both as a band member of M!LK and as an actor.” Rather than trying to pin down his potential, he proactively takes on new challenges, whether they be acting gigs or newfound interests. He is widening his breadth as an actor and growing as a person.

Born March 23, 1998. In 2021, Hayato appeared in a variety of popular works such as the TBS Sunday TV drama, “Dragon Zakura” and “TOKYO MER: Mobile Emergency Room” and the film “Kaguya-sama: Love Is War.” He is currently ap-pearing in Nippon TV’s Sunday drama, “Guilty Flag” playing the character of Is-sei Tachibana. He will appear in the film “Usogui” playing the character of Ta-kaomi Kaji which is scheduled for February 11, 2022 release. His vocal dance unit M!LK made their major label debut with Victor Entertainment for their hit single, “Ribbon” on November 24, 2021.