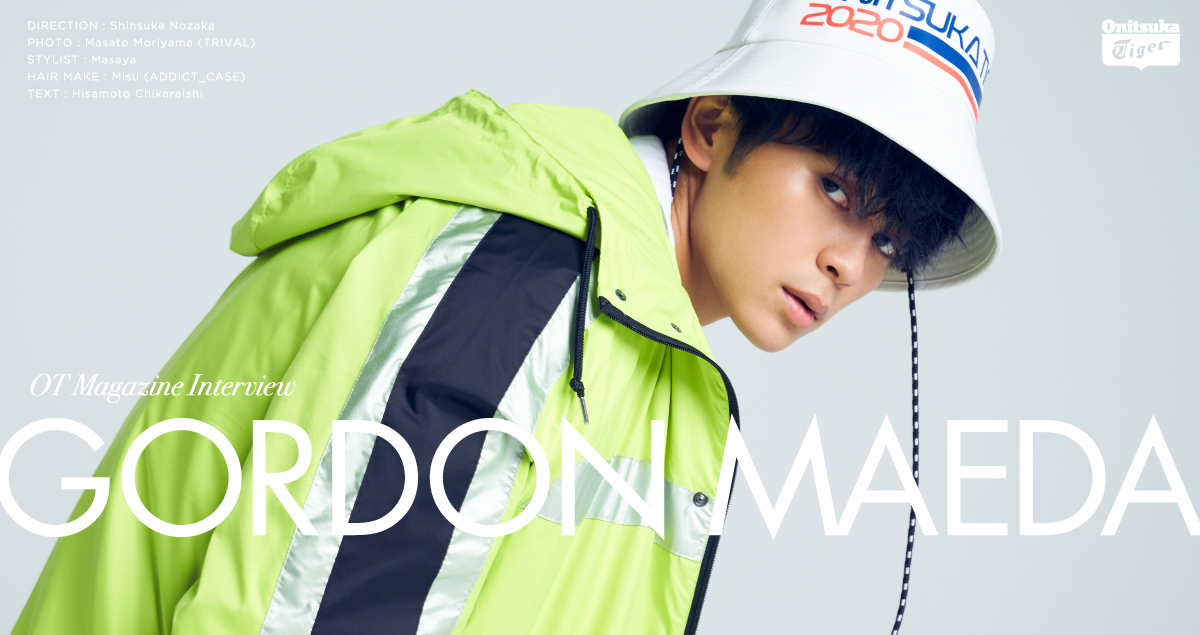 Appeared on the scene in 2019 bringing with him a fresh air.
We zero in on this up and coming actor.

The actor Gordon Maeda made a comet-like debut in 2019, appearing in numerous movies and TV dramas. He is drawing attention for his clean-cut looks and larger-than-life acting ability. Now having turned 20, I asked him about his fashion sense, private life, and outlook for the future. 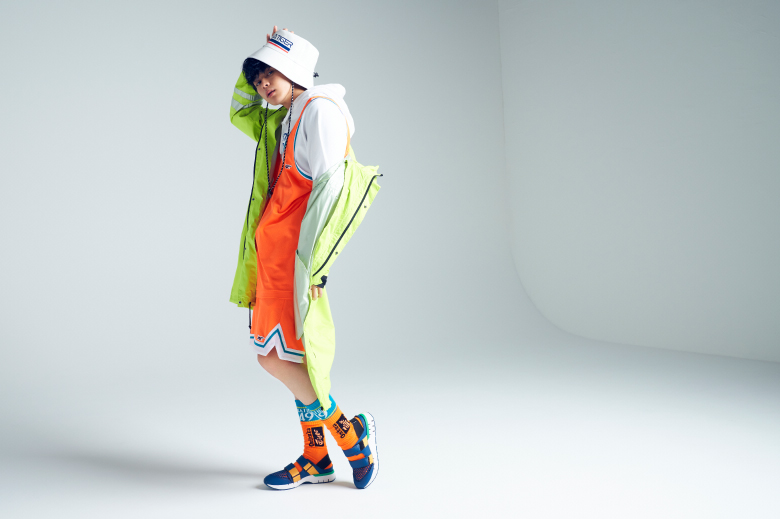 Wearing a balanced ensemble with a calculated number of colors from monotones to neon.

“I normally wear monotone clothes. If I was to wear colors, I like neon. When coordinating an outfit, I like to narrow the number of colors down to three.” We asked him if he has any style rules. His street-look with keytones of vivid yellow and orange reflects his aethetic sense; it attracts attention, but he wears it well without trepidation. “I like fashion, but I do not decide on a preferred genre or category of clothing; I like to choose clothing items over a wide-range. I used to be a skateboarder, so I also enjoy a street and sporty style of clothing.” 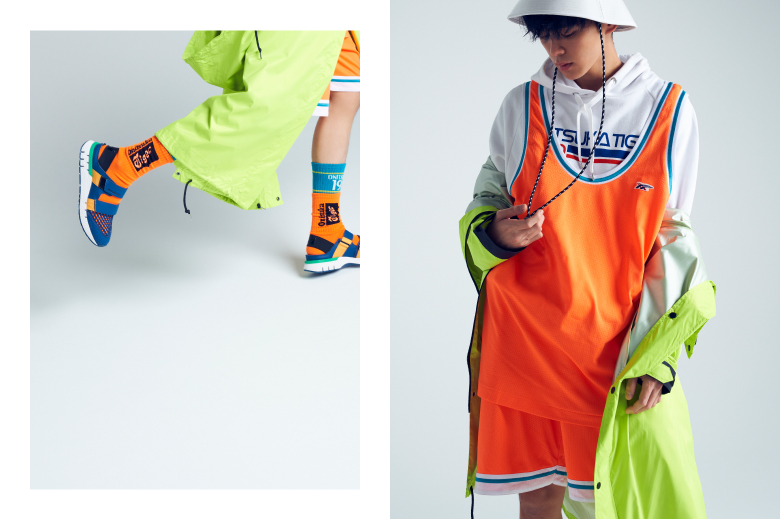 Maeda begins moving his body in an easy manner according to how this active style makes him feel. His mood begins to match his outfit. We asked him in particular about his preferred style for the coming season. “For this Spring and Summer season, I want to wear street fashion like the first ensemble for this fashion shoot. Wearing this outfit naturally lifted my spirits (laughing). I thought it was cool to wear the long T-shirt over the sweatshirt, and will make a note of it.” For our second photo shoot in Look2, Maeda will be outfitted in cool clothes to draw out an adult look. In contrast to Look1, Maeda’s character will shine forth in a tranquil mood. “The colors of this second ensemble are closer to what I normally wear. They are cool, but there is also a sense of playfulness” (check out Look2 to be released February 10th!) “I mostly wear sneakers ordinarily, but what I wore today grabbed my attention. Depending on the ensemble that you wear, the shoes will tastefully rein in the ensemble, or conversely be a miss. Shoes play an important role in what I wear everyday.” His love of sneakers can be felt from the child-like enthusiasm in his eyes as he talks. 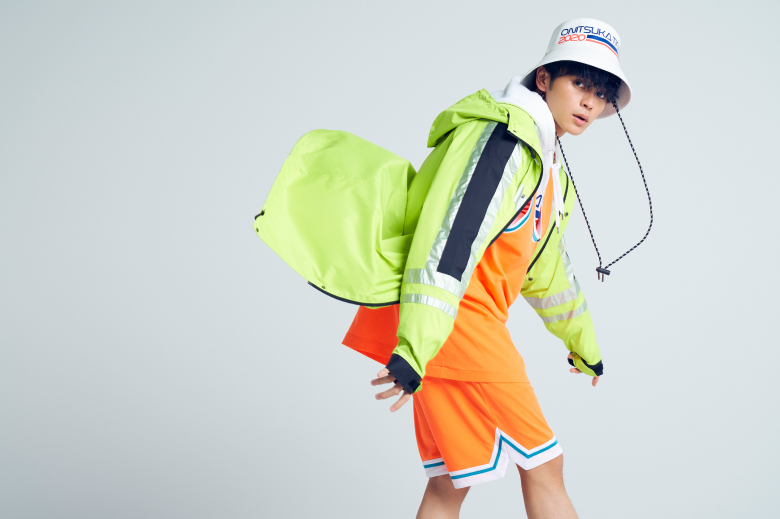 He invests his time and full attention in his life’s work.
Becoming absorbed in something will create his future self.

Maeda has been broadening the range of his work as an actor, stating “I am living everyday to the fullest and am content.” When I shifted the conversation to his private life he laughingly remarked, “I am at ease when I am at home, but I inevitably go out!…On my days off, rather than completely turning off, I go to the gym or go see a film or a stage play – something that will benefit me. At all times, I try to do things that will help me create characters or help my work. Conversely, if I am not doing something to hone my craft, I feel guilty, or the mind becomes hazy, so perhaps I am less relaxed during my off time (laughing).” 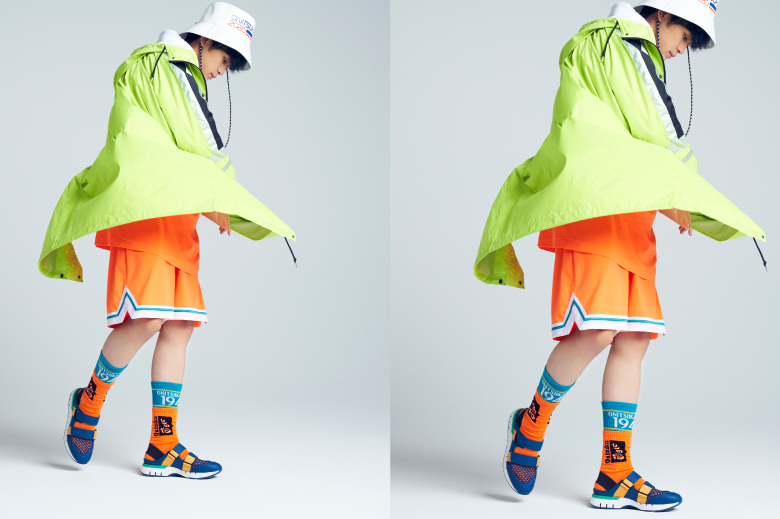 He gives off the impression of being honest and earnest in what he does. In what circumstances in daily life does his spirit rise, revealing his true self? “My spirit rises when I am eating good food. Recently, I have been controlling what I eat to improve my health, so everything tastes good when I eat (laughs). The breakfast that was served for this photo shoot was something I had been craving for a while – a sandwich wrap. I was ecstatic and it lifted my spirits (laughing). Thanks for the great food!” 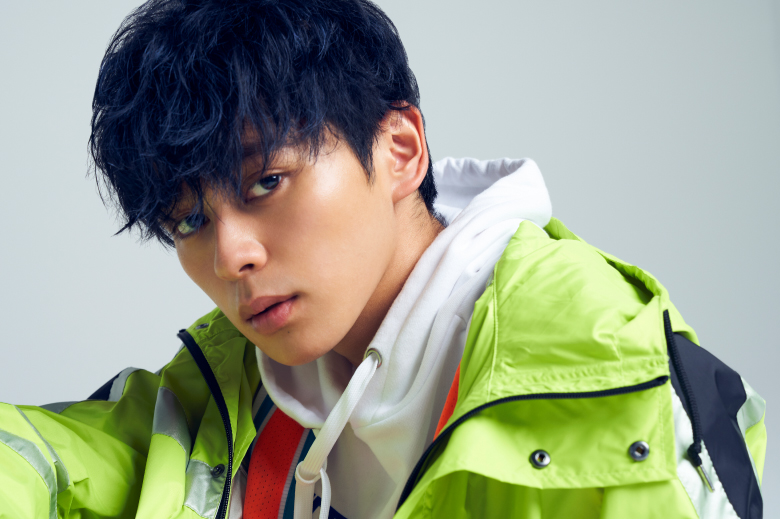 While he is honest and earnest in his attitude, he is also a mysterious person as he brings out the charm when you least expect it. When I asked him about this, he told me that he was shaped by two activities that he had been absorbed in for many years. “In my 20 years of life, I spent 7 years doing Kyokushin Karate, then 7 years after that playing the saxaphone. Karate taught me manners and mental fortitude which are important qualities for any person. From the saxaphone I learned the importance of making an effort. Discipline and training cannot be neglected in either case, and it is a matter of course that you build character and ability from daily practice and repetition. Such habits have become the basis of my life and have helped me immensely. Henceforth, I hope to apply this discipline toward acting which I hope to continue throughout my life.”

Gordon Maeda
Born January 9, 2000 in Los Angeles, USA. An up and coming young actor who debuted in 2019. His good looks and 183cm stature are also being applied as a model. Movies and TV shows he has recently appeared in include the movies, “Small Love Song” (role of Shinji Fukumura) and “12:00am, Come Kiss Me” (role of Akira Hamabe) and the TV drama, “No Side Game” (the role of Keita Nanao), among others.