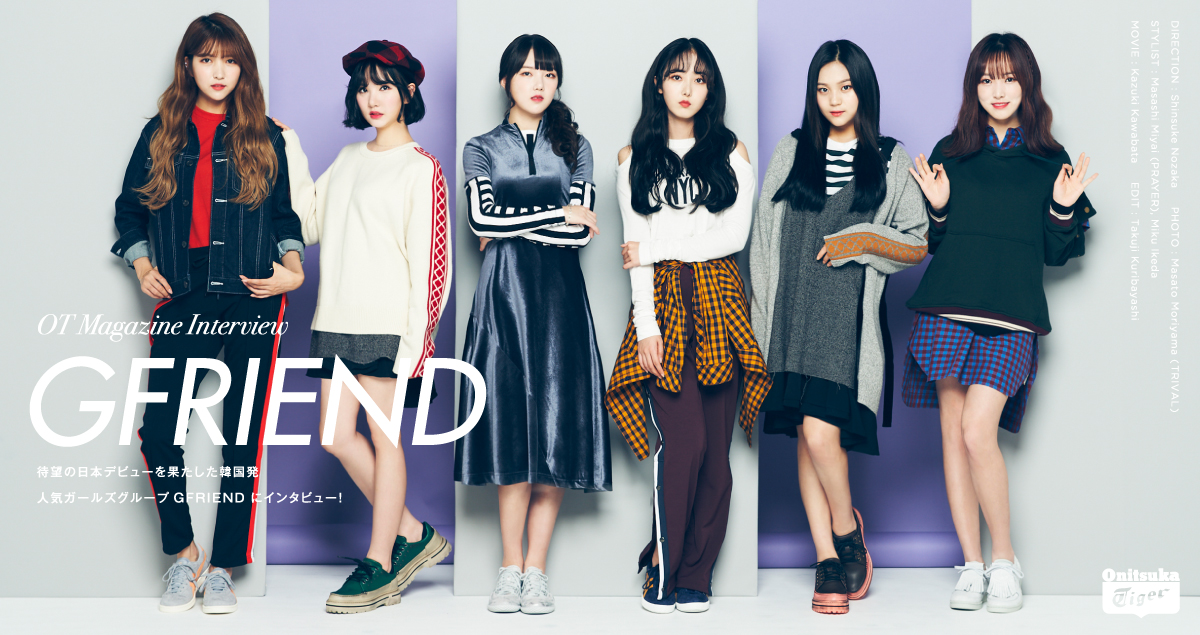 Their long-awaited Japan debut is here
This popular girls’ group is out of Korea
An interview with GFRIEND!

Since GFRIEND debuted in Korea in 2015, their cute looks and catchy tunes have led to a string of hits for this “dream group.” The six members, Sowon, Eunha, Yerin, SinB, Umji, and Yuju, weave a scintillating web of performance magic which attracts new fans worldwide daily. And now they’re giving the Onitsuka Tiger look a try for the first time! Check it out, you can see comments from the different members. 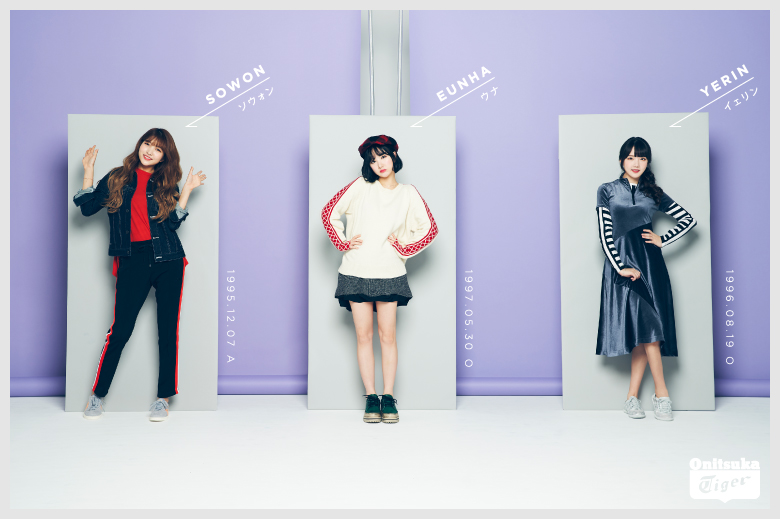 ── So, what do you think of these Onitsuka Tiger items?

(Sowon) These pants with a black base and red and white lines are cool, and they make for a striking outline. Plus they’re unisex, so I would definitely recommend them.

(Yerin) They have the velvet material that’s hot this year, but in a sporty look. This elegant dress is really cute!

(Eunha) The thick sole design is nice. I think these would work with something casual as well as more sophisticated outfits! 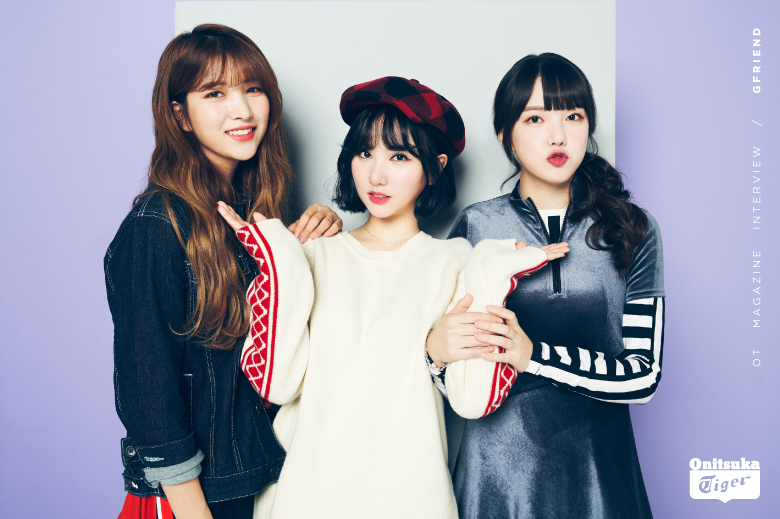 ── Do you have any beauty or style secrets?

(Umji) I always try to eat a lot of fruits and vegetables. If you’re careful with your diet, your skin will be nice too.

(Yuju) Our dance performances are really hard, plus I’m really careful to maintain a regular stretching routine. Stretching helps reduce swelling, you should try it!

(SinB) I do pilates, and always try to keep it in mind to make good, clean poses. 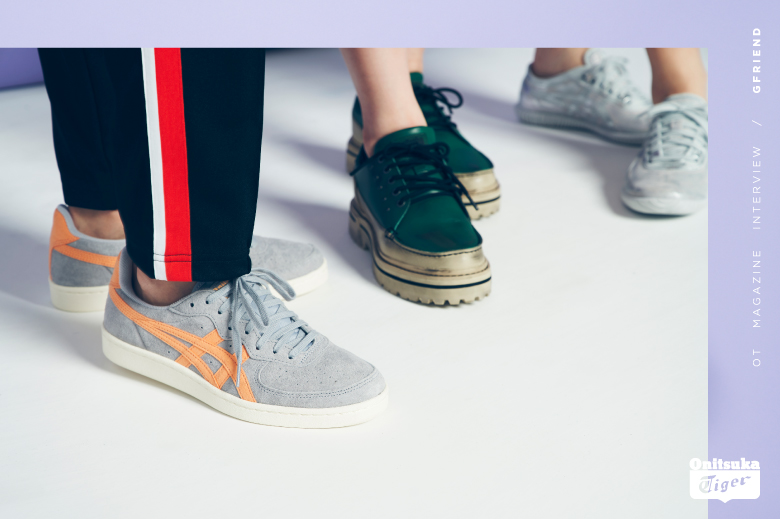 ── Tell us where you got the name for your group.

(Eunha) We want our music to appeal to everyone, just like if we were great girlfriends to guys, and super supportive and close friends for girls, whoever you are, we’ll be right there by your side. So, the first two letters of GFriend can stand for either “good friend” or “girlfriend.” 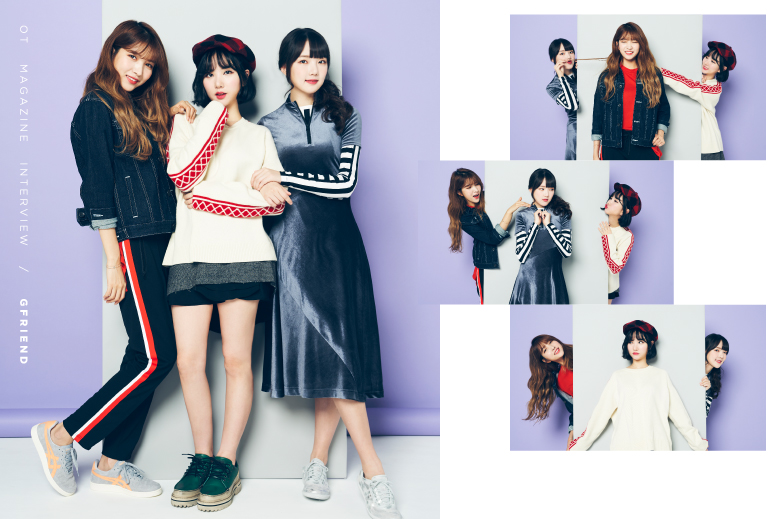 ── What’s the story with your first single to be released in Japan, “Memoria / (Time for the moon night)”?

(Yuju) It has a beautiful melody and unforgettable lyrics, which I think makes it perfect for this time. Especially for the “Memoria… Memoria…” part, it’s so catchy that you won’t be able to get it out of your head. 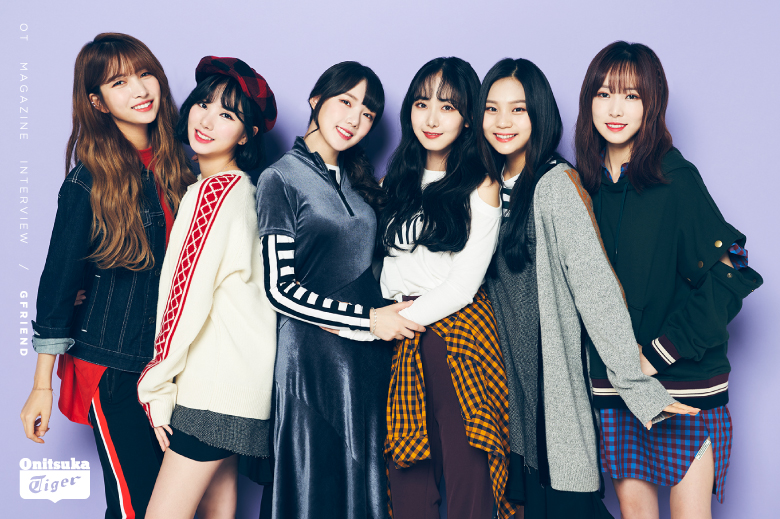 ──  How about a message for your fans in Japan!

(Sowon) In our performances, we pull out all the stops. Thanks for all the love, Japan!

→ You can look forward to seeing more of GFriend again in the next issue of LOOK.2! We dig deep, and get to hear about what’s going on in their private lives, and all the things they like about Japan.

This six-member girl group shines, with smiles that exude innocence and a subtle dynamism.

GFriend, the name that means they’re cute girls to guys, good friends to girls, and their music will always be by your side, like a trusted confidant.

They made their debut in Korea in 2015, taking the industry by storm with a clean sweep of the new band category and garnering 29 awards in music programs in 2016, completely redefining the girl group genre.

Their May 2018 album, “Kyo Kara Watashitachi wa – GFRIEND 1st BEST-”, was their Japan debut album, and in October, their limited Japan original single “Memoria / Night (Time for the moon night)” was released, hitting 6th place in the Orikon Weekly Chart.