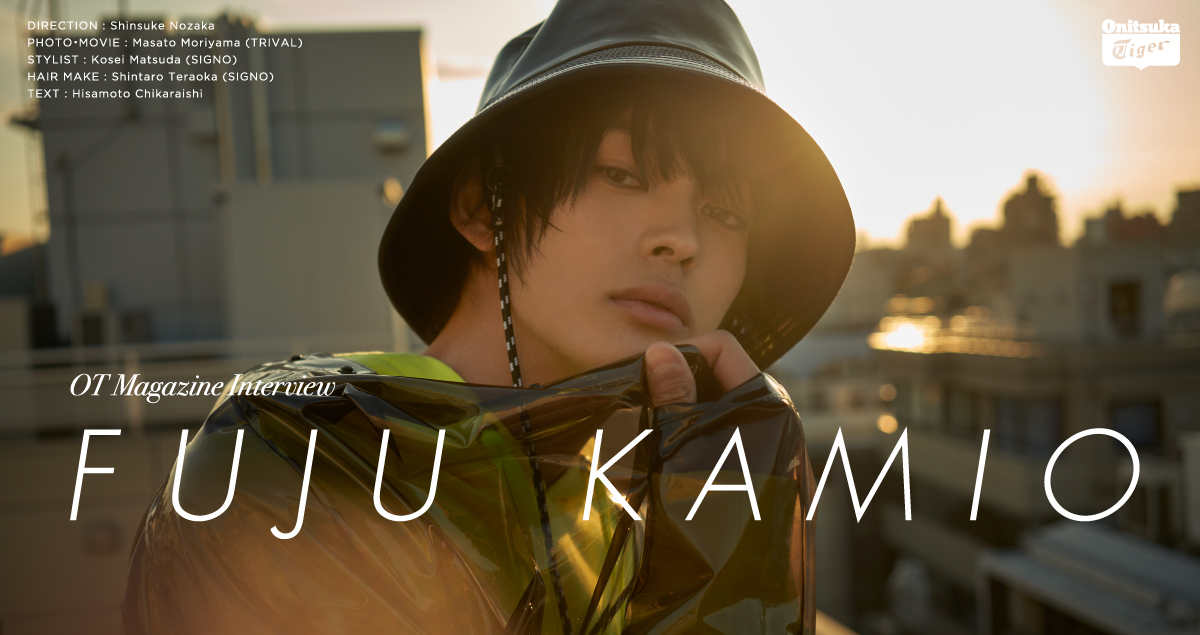 This Spring, this actor who is doing
remarkable work wears bright colors!

Actor Fuju Kamio has been generating buzz with his appearances in numerous, much-discussed TV dramas and films. In this second photo shoot and interview, he stylishly wears Onitsuka Tiger clothing and talks about his recent fashion sense and how he spends his private time. 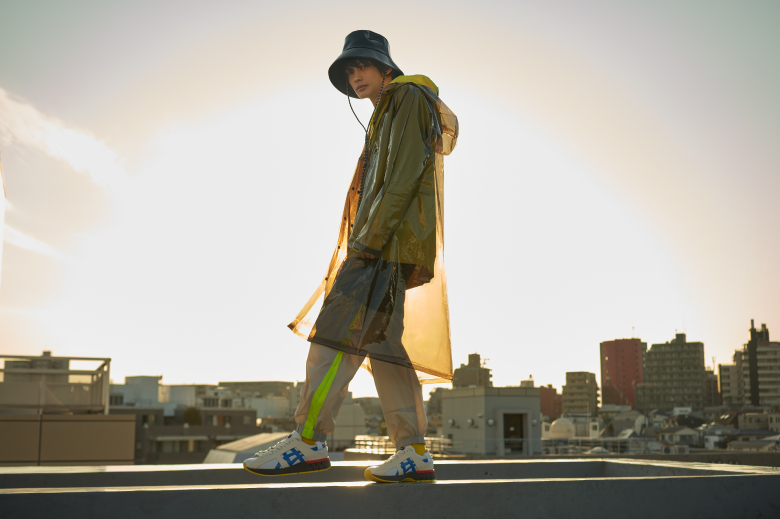 Surprisingly, bright accent colors
naturally fit into his own style

“When I wear bright-colored clothing, my mood becomes brighter than when I wear my ordinary black-colored clothing (laughs). According to my mother, I liked yellow and orange colors when I was a little kid. But before I knew it, I was wearing black and white which makes coordinating colors easier. Wearing bright colors brings back memories, and I was able to match my clothes without feeling awkward. Neon colors go well with black which I am accustomed to wearing, and this ensemble has been a useful reference for accent colors. From the Spring through Summer, I will see if I can coordinate my outfits by including vivid accent colors.” 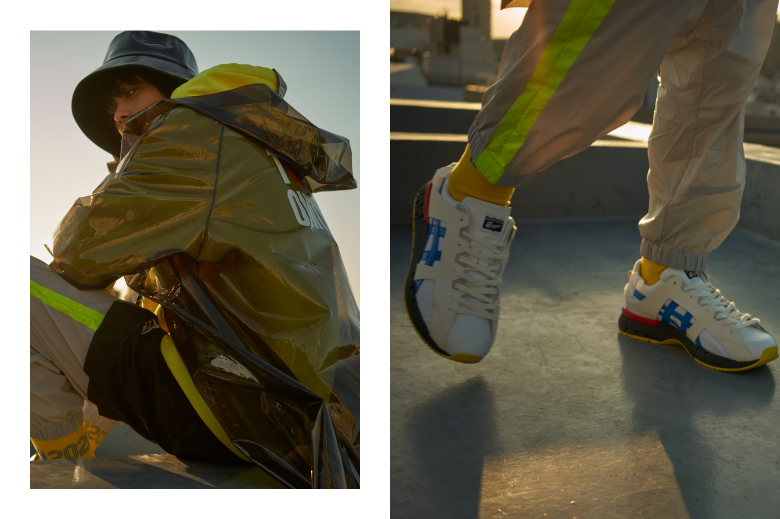 Adding pomp to this fresh style are sneakers with a distinctive three-dimensional design. Compared to the à la mode “P-Trainer Knit” that he wore for look.1, “FABILAC” for look.2 is sporty and adds lightness to the ensemble. 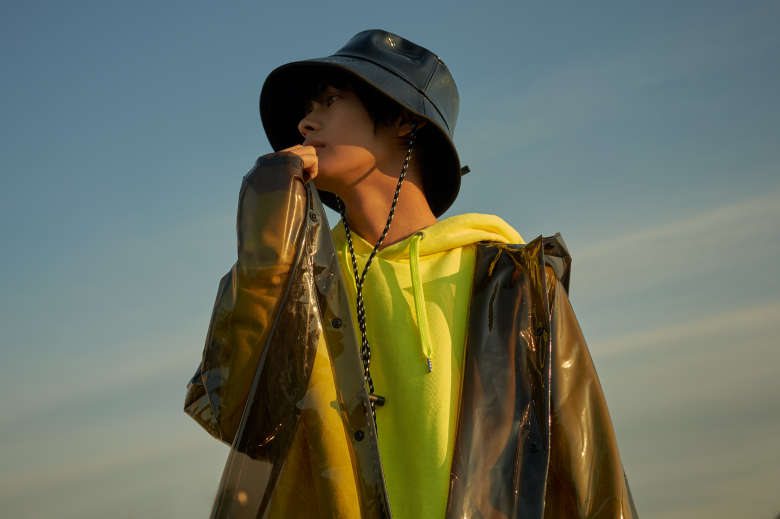 Having been armed with a new style involving colored items, what does Kamio imagine himself wearing this Spring? A colorful, sporty look? Or an à la mode look with accent colors? It seems that such pleasurable worries will never end.
“Incorporating this kind of nylon track pant for a sporty element is a good idea. This is a genre that I have not tried before, but after today’s photo shoot I’ve begun to get into it (laughs). It would also be fun to wear an all-black outfit accented by primary colors such as yellow and red socks. People that I consider to be cool and fashionable are people who challenge themselves at wearing different genres of clothing. Rather than deciding, ‘I will only wear this kind of style…only one kind of clothing suits me,’ mixing it up on occasion is a good thing. I think people who are capable of wearing many different styles of fashion are great. I hope to be like that too.”

On a side note, I asked him what he likes in women’s fashion.
“At this time of the year, I tend to look at women who wear a refreshing ensemble that feels seasonal (laughs). For example, women who forthrightly wear a pink shirt or jacket. This Spring, women who have a talent for incorporating colors into their fashion will definitely catch my eye (laughs).”

I have music with me at all times:
The true face of this 21 year old who gets energized listening to “The Yellow Monkey”

The photo shoot ends. Kamio who is in popular demand will now head to his next gig. He appears in a TV drama that is now on air, and will appear in a film scheduled to be released in early Summer. Although he is taking on a number of roles, he also has aspirations in his private life.
“I spend most of my time indoors – even if I go out, I end up inside a room anyway when I go out to karaoke or somewhere (laughs). I don’t know what I should start doing, but I want to do something out of doors. Like spending time outdoors with friends or going for a drive. I want to incorporate yellow colors into my outfit to lift my spirits and go out (laughs).”

He is presently working in a film, and there are high hopes for his acting career henceforth. He has an adult-like charm and can, at times, convey a mysterious mood. I asked him about his interests, and he immediately responded, “I like The Yellow Monkey.”
“I like to listen to music. On my days off, I listen to music or go out to karaoke with friends (laughs). I am especially into The Yellow Monkey and enjoy listening to them when I relax at home or when I want to lift my spirits before a gig. The first time I heard their music was when my aunt loaned me one of their albums. I was once interviewed for The Yellow Monkey’s 30th Anniversary feature article. My favorite song is ‘Freesia Boy’.” 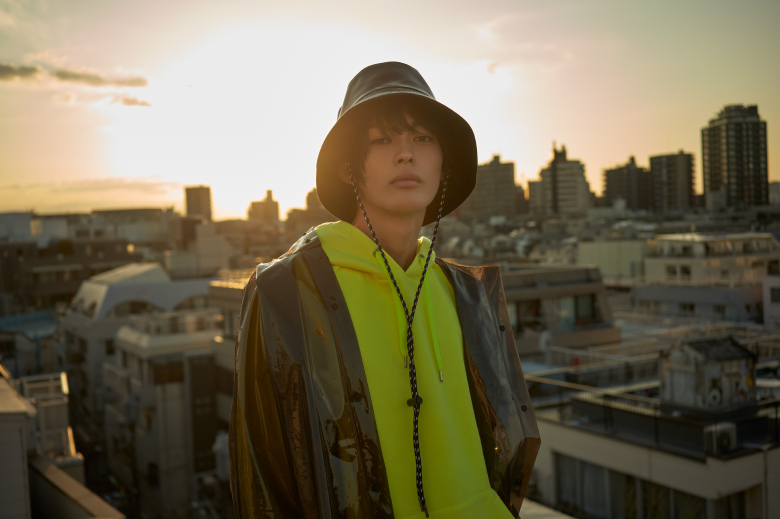 When he talks about music he is all smiles. When he shows his true self, he strikes one as an innocent 21 year old youth.
“I may not show it on my face, but I am really enjoying myself (laughs). Just going out to dinner with friends raises my level of enthusiasm.”
Fuju Kamio, a youth with diverse appeal, is now a hot spot on my radar.

He was born on January 21, 1999 in Tokyo. After graduating from high school, he auditioned for a talent agency and began his career in show business. He made his acting debut in 2015 appearing in a TV drama and has since appeared in a number of films and stage plays. In the TV drama “EREN THE SOUTHPAW” which aired in 2019, he generated a lot of buzz as the main character Koichi Asakura. Apart from appearing in the now airing “Trapped in the Box” (TV Asahi), he will appear in the TV drama “Liked! Hikarugenji-kun” (NHK G) to be aired in April, the film “Secret SNS Account” for release on June 12, and the film “Kiss Him, Not Me” to be released on July 10.  His 1st Photo Collection “Continue” (Wani Books) is being favorably received and went on sale on his 21st birthday.