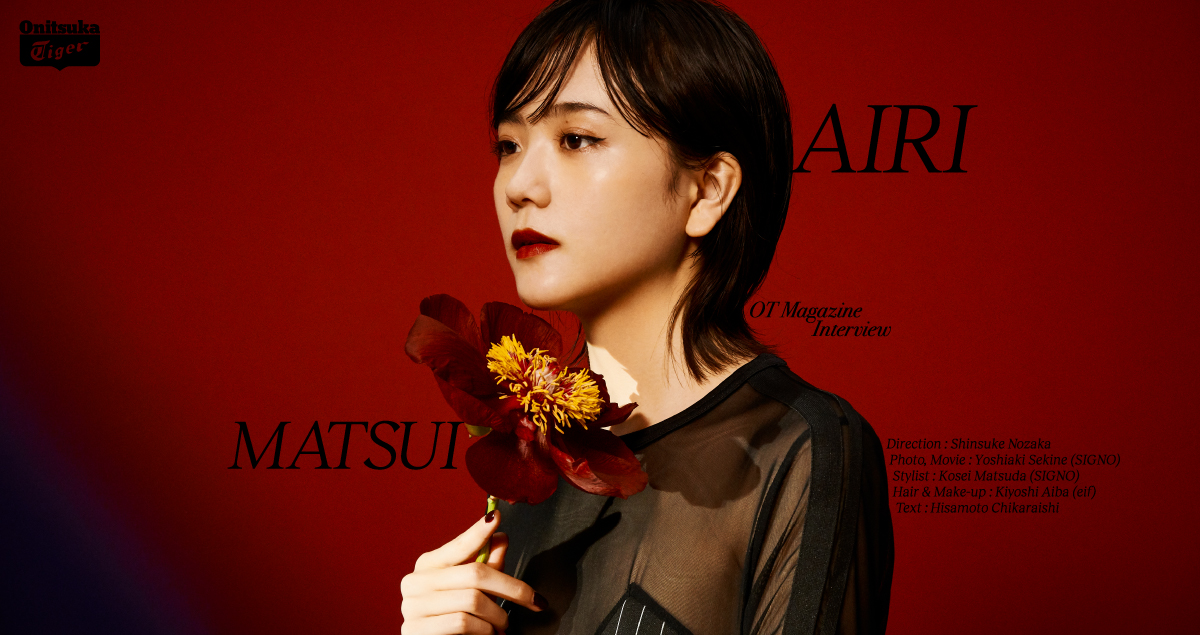 She devotes herself to whatever excites her!
Taking up a new hobby opens up new possibilities.

Airi Matsui is active across a broad range of genres such as modeling and acting. In look.1, I asked her about her views on work. In LOOK 2, I ask her about her fashion sense and how her curious nature has shaped her private life. 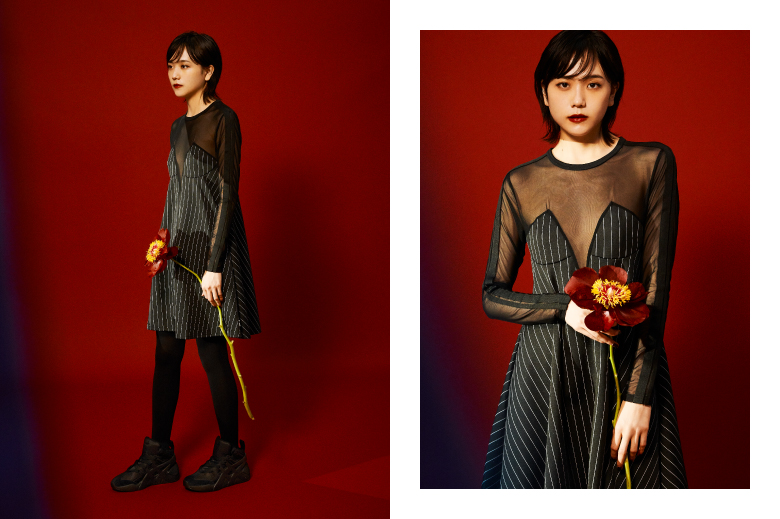 In a switch from the sporty look in LOOK 1, she dresses up à la mode. A refined black ensemble made up of a see-through one-piece dress and sneakers, topped off elegantly with a fur jacket. Exuding the allure of a sexy girl, she possesses a sense of familiarity and flamboyance. “In combining a tight one-piece dress with sneakers, my preference was for a casual style using tasteful items. I am not accustomed to wearing short dresses so I felt a little uneasy (laughs). I want to challenge myself this season with a one-piece dress.” Looking back on the two LOOK fashion shoots, she remarked, “The Onitsuka Tiger brand allows you to have fun coordinating a wide array of looks by mixing and matching various colors, patterns, and designs.” 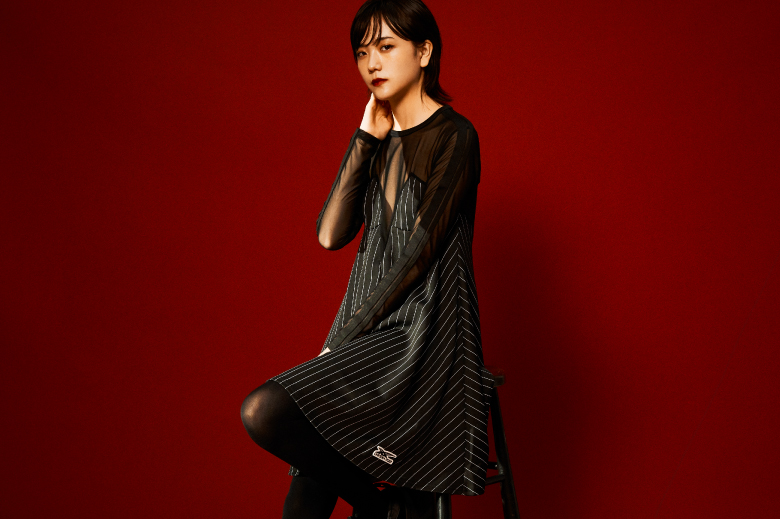 While she often wears a boys outfit with a baggy silhouette, she has revised her take on fashion after cutting her hair short. “After cutting my hair short, my take on fashion changed. I had an aversion for tight-fitting clothes, but now I have discovered that they may suit me after all! Whether it be a top that is clear-cut in some way and tight-fitting and or that shows some cleavage, I can now wear them. I now think of trying on clothes that I normally do not wear. Fashion has become more enjoyable and I have become happier!”

What are some items that she has shown a renewed interest in wearing because of this change in taste? “I want to try wearing shorts. For me, shorts are difficult to balance with the rest of your ensemble. Although I bought some last year, I haven’t been able to wear them yet. I am also keen on trying on a Henley neckline shirt that has buttons only on the base of the neckline such as a knit polo shirt or a polo shirt-style cut sew. I want to coordinate them for a boy-ish look.”

She will be the first to try on garb that catches her eye or that she feels is original of a kind that she has not seen before. Then she becomes engrossed in the garb until she is satisfied. This seems to take her mind off her busy everyday schedule. “I have stopped eating out so much and have got into cooking. I am not confident with my taste so I don’t want to serve it to others, but I often cook Japanese food. I make things like kinpira gobo (braised carrot and burdock) and chikuzenni (simmered chicken and vegetables.) I regularly receive vegetables from my grandmother which are always fresh and healthy. Keeping your body in good condition will have a good effect on your work. I may have become interested in cooking as I feel refreshed when I am cutting vegetables (laughs.) It is also fun to create original menu items using leftover ingredients.” 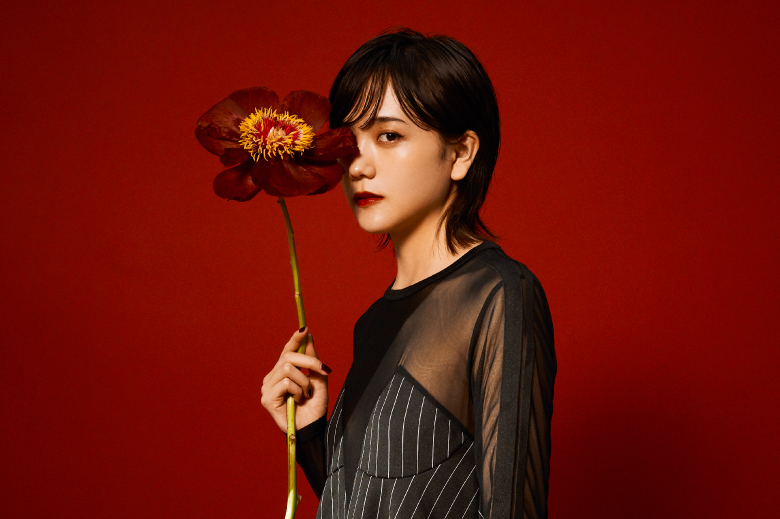 Apart from cooking, she has developed a keen interest in going to a popular sauna that everyone’s talking about. She became hooked after a friend suggested it to her about month ago. “I go when I want to feel refreshed and reset how I feel. At first it was a little scary because you feel that your heart may stop when you go in the cold water bath, but once you go in it feels really good (laughs.) I always do a few sets to set myself to rights.” I got a glimpse into her inner self when her curiosity leads her to take that first step into doing something new. I now understand why she always keeps a smile.

Born on December 26, 1996 in Fukushima Prefecture. Airi Matsui made her professional debut in 2009 as a dedicated model for the teen fashion magazine “Nicola.” In 2013, she was hired to do a commercial for “Zexy” magazine and garnered popular appeal. In 2014, she was picked up as a dedicated model for fashion magazine “Ray.” In 2020, she became a regular model for fashion magazine “GINGER.” Currently, she is a main MC for the NHK-ETV program “Numa ni Hamatte Kiite Mita.” Works that she has recently appeared in include the film “Iyashi no Kokoromi” and “My Blood and Bones in a Flowing Galaxy” and the MBS late night drama “In-House Marriage Honey.” She will also appear in the FOD original drama “Eroi Kareshi ga Watashi wo Madowasu” scheduled to be streamed on September 18 and “First Gentleman” scheduled for release on September 23.