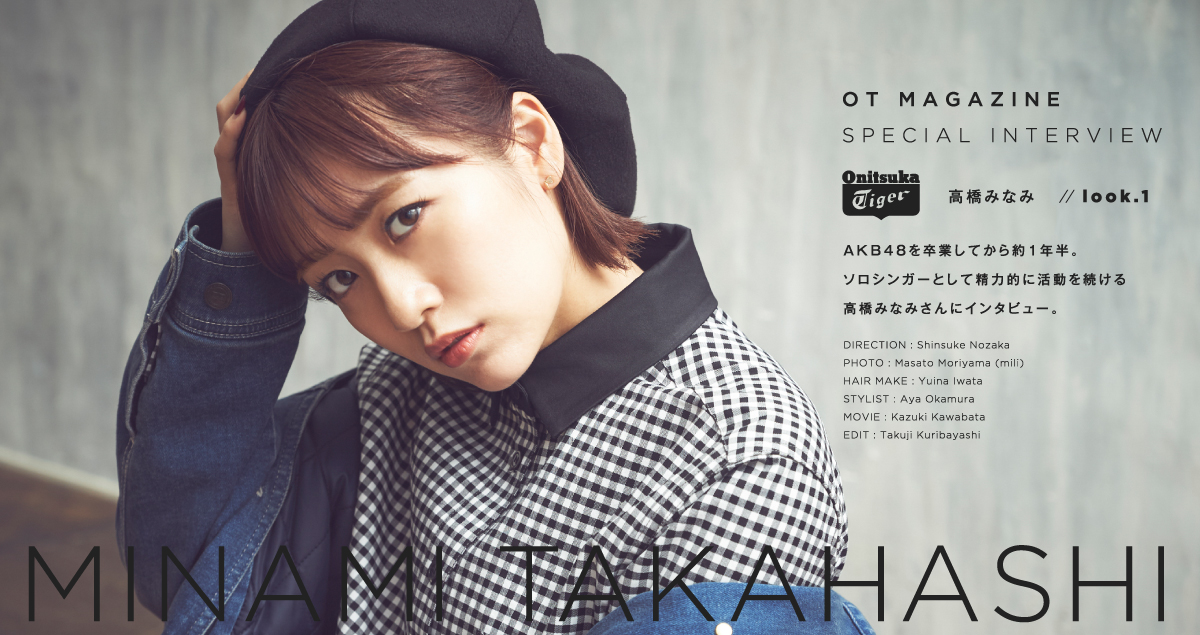 It’s been a year and a half since she’s moved on from AKB48.
Enjoy this interview with Minami Takahashi, who has boldly set out on a solo singing career.

Ms. Takahashi, as the first General Manager of AKB48, was tasked with the leadership of hundreds, and the group members. Then she decided it was time for a break from some of that work. As she stepped down from AKB48 membership, she subsequently stepped into a solo singing career, and is set to wrap up her first nationwide tour this year, with great success. We ask her all kinds of stuff about fashion in this interview! 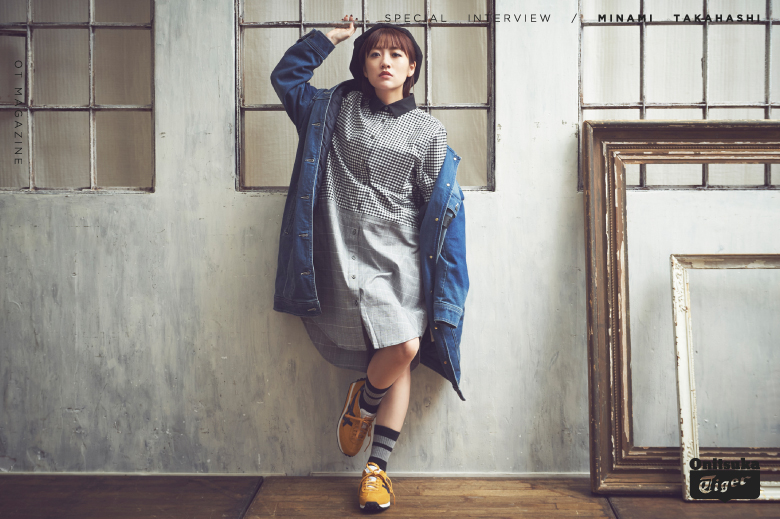 ── So, how was the shoot?

It was fun! There were some items that I’d been wanting to check out that I finally got a chance to try today. And there were some combos that I hadn’t realized, some nice discoveries. I think Onitsuka Tiger has a new fan.

── Your outfit really worked for you

Everyone said it was nice, but that might just be lip service (lol). But when I heard, “This is a good look for you,” it made me want to dress like that normally.

In AKB48, I really had a complex about my short stature, so I was constantly in heels. But now that I’m on my own, I have lots more chances to go out, and I want to wear something more comfortable. So Onitsuka Tiger shoes like these are great!

They are! They fit so great. I have small feet, so often I’ll have these long laces dangling down while I’m walking. But these fit really well so I don’t have to worry about tugging on the laces lot to adjust them, it’s really nice! 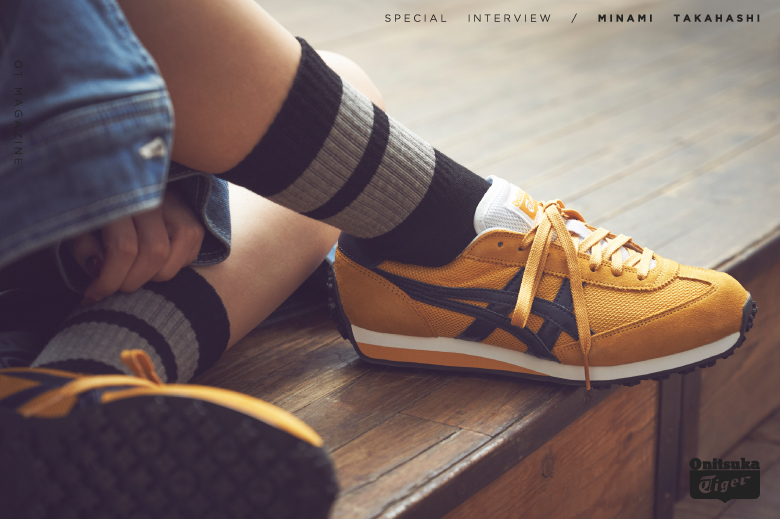 ── Do you wear sneakers often?

Yeah, I do. In heels, just walking a little gets tiring, but if I’m wearing sneakers I can keep going for as long as I like!

── What kind of clothes do you usually wear?

Depending on the day it can be totally different. In 2018 I turn 27, so I want to dress in more sophisticated, simpler outfits. I’ve always worn more flashy stuff, so it’s time to tone things down a little (laughs).

── Is there anything you use as a sort of guide for fashion?

Instagram’s really hot right now, isn’t it? I check the tags there and follow lots of people, see what they’re wearing and what kinds of outfits people are putting together, that’s my basic frame of reference. 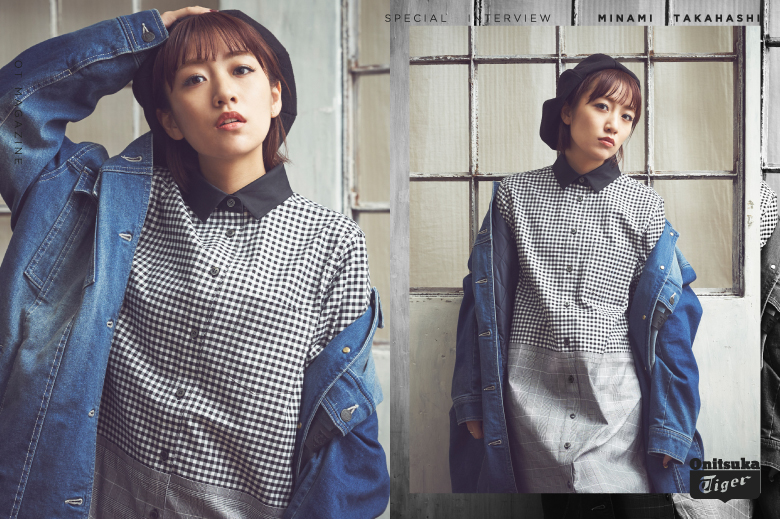 ── Where is one of your regular shopping spots?

I love the vintage clothing shops in Daikanyama. I usually go for looks that are a little different from everyone else, so I often go to Daikanyama in search of things that no one else will have, to set me apart from the crowd.

── So, when you’re shopping for clothes, what are the points you have in mind when deciding on fashion items?

Up until now it’s been kind of all black and white, but lately I’ve been getting red and yellow things, to sort of brighten up the inside of my closet, make it more colorful.

Mine sure did. Up till junior high, I was trying all kinds of different looks, like dressing in all camouflage from head to toe (haha). People would be like, “What is that? Are you in the army or something?” So those kinds of comments made me realize the “wear everything” approach wasn’t working. Eventually I kind of just dropped all the colors, and went with all black and white stuff.

After that, my foundation was all black and white for a while, but something simple like that gets old quick, doesn’t it? So then I was like, okay, it’s time to spice things up with some color! Wearing red makes your day more interesting (smiles). So more recently I’ve been focusing on introducing various colors into my wardrobe. 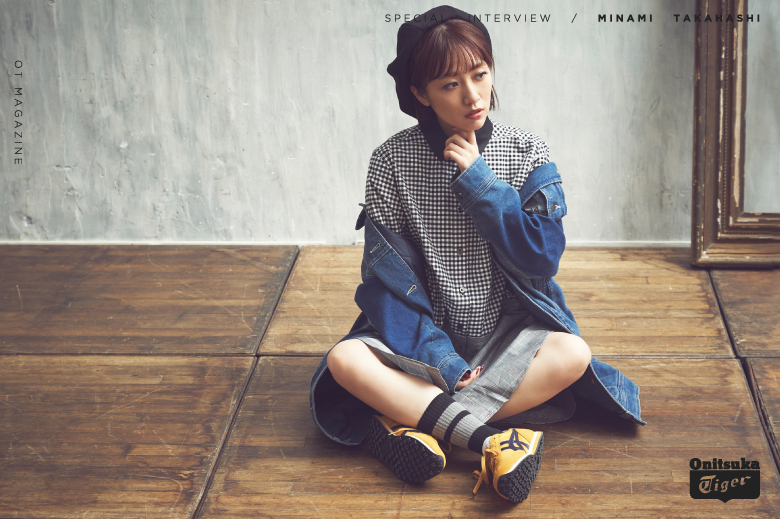 It flew right by, I had to just kind of focus on one day at a time. When I was in AKB48, it was a big group, there were lots of members and lots of staff, but now that I’m on my own, there aren’t as many people counting on me, so in a way it’s sort of been a relief. Kind of like a weight’s been lifted off my shoulders.

── So if you had to sum up the year in a single word, what would it be?

“Myself.” I think I’ve learned who I am and what I’m capable of. I was able to do the nationwide solo tour I’d been dreaming of, and I rekindled my desire to sing. I’ve found out what’s expected of me and what I should be doing. So this has definitely been a year of self-discovery. 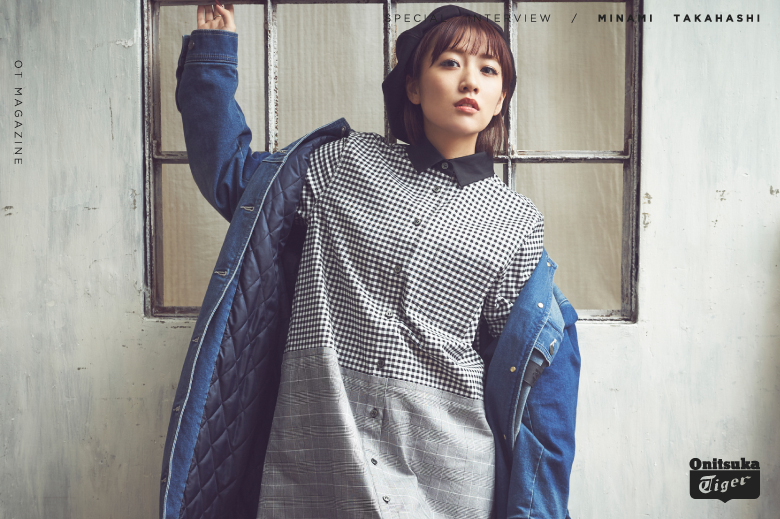 → The first interview of 2018 will also be featuring Minami Takahashi!  We dig deep, and ask about lots of stuff, including her aspirations for the new year, and some private issues!