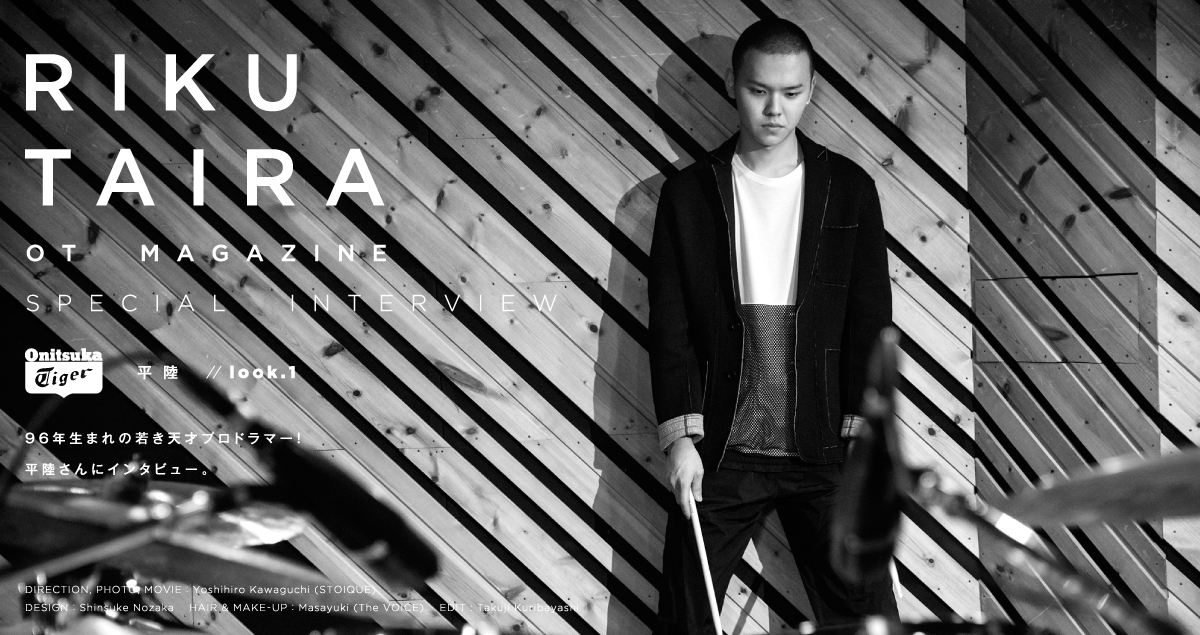 The young genius pro drummer born in '96!
An interview with Riku Taira.

Riku Taira, a drummer since childhood, has often been called a genius for his dynamic and supple style of drumming. He was highly rated for his live performance at the Onitsuka Tiger x ANDREA POMPILIO 2016 Autumn/Winter collection, and will be getting more and more famous from here on out! In this interview we ask him all about his music and fashion from past and present. How were the clothes you wore for the shoot?
They were really nice and sophisticated! I’d never worn a t-shirt with mesh before, it had an interesting design. I’d like to try wearing it for my stage outfit sometime. The shoes were so great. They’re comfortable for playing drums, and really light! As soon as I put them on, they felt really nice, and I felt like I could just get right up and start running (laughs).

So, how did you get into drumming?

I don’t really remember, but my dad was playing in a band for fun, and I guess every day I used to imitate the drumming. I used to do drumming with my chopsticks, the dinnerware, whatever. What was one of the first songs you really liked?
“Detroit Rock City” by KISS. After hearing that, I just got more and more into them. Being a kid, I was really attracted to those costumes, the scenes of spitting blood and everything (laughs). I used to try to put on makeup like them too. When I think about it now, I’m surprised I didn’t end up crying. I was just really into them.

Oh, that’s really interesting! So, do you remember when you had your first public performance?
Yeah, it was when I was 8, I was in a band with my dad. That was my first live show. I thought, “I never knew performing in person would be so fun!” What do you like about music?
When you perform live, I feel like your true character comes out, more so than just when talking to someone. Those times are interesting. Impatient people, selfish people, and also normally cooperative people, when they play music, their true character really comes out. By the way, I happen to think I’m selfish.

In a band, what kind of role do you look to play as a drummer?
I think I’m the leader. Changing just the drummer changes the mood of the music, and the entire image. I feel like that’s the kind of control the drummer has over the music. Is there anyone you’ve performed with who’s made a strong impression on you?
I just turned 20 recently, and had the opportunity to play live with Tony Maiden, the guitarist for Rufus & Chaka Khan. Tony gave such an incredible performance, it was really inspiring; the whole atmosphere just naturally changed with the sound that he produced. Being able to witness that firsthand really had a positive effect on me. And last, tell us, what is music to you?
I can’t live without it. It’s something that’s just always there, a natural part of existence.

→ In LOOK.2, which will be released next month, check in to hear more about Riku Taira’s private life!

Riku Taira
Born in Shizuoka Prefecture, January 23rd, 1996.
He was inspired by KISS at the age of two, and started drumming at the age of six.
He started playing live shows at the age of eight, mainly rock music.
He has studied under Yoshihiro Koizumi, Kozo Suganuma, Hiro Tsunoda, and Tommy Campbell.