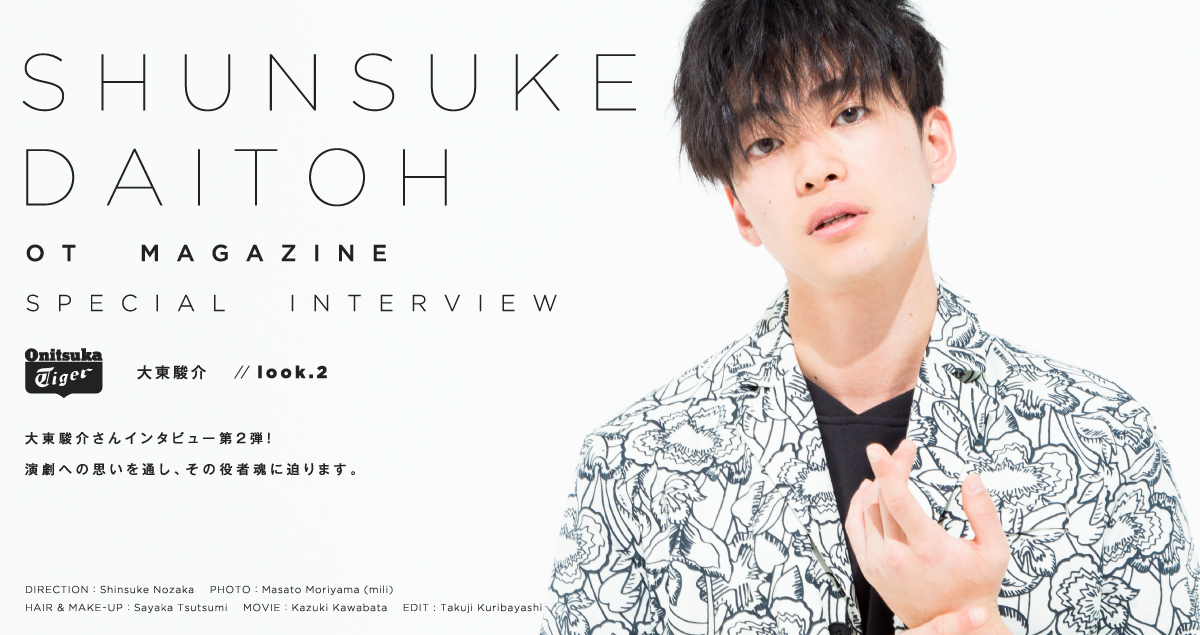 Part two of our Shunsuke Daito interview! In this interview we add Shunsuke's thoughts on and approach toward performing.

This March, Shunsuke turns 30. Commemorating a new milestone, he gives a strong performance in Midareuguisu, a show filled with hot young stars. We talk about all kinds of stuff with Shunsuke, including backstage secrets, how he feels about work, and more! You’ll be 30 in March; how is it to look back on your 20s?
It’s been pretty crazy (smiles). I’ve had an interesting life, even if I do say so myself. I’ve never once thought the past decade would be like this. In scripts as well as in my life, all the stories, whether good or bad, have been interesting. Looking back on the past ten years, I realize that’s exactly what it’s been.

You’ve had all kinds of interesting experiences, haven’t you?
Yeah; for one, my work has given me the opportunity to go overseas quite a lot. I go around to different countries and get my brains beat out (laughs). It might be a weird thing to say, but people tell me things like, “Hey, what you need to do is this…,” and so on, I think it’s really helped me to improve myself and grow as a person. You’re right in the middle of rehearsing, aren’t you?
Yeah, it’s pretty fun. Especially Arata Furuta. He pretty much always seems like he’s drunk (haha), but as soon as he looks at a script, he totally becomes calm, cool and collected… It’s kind of a surprising transition to see. Is there anyone in particular you’d like to perform with in the future?
There are so many! I was able to perform with some more experienced people that I had been hoping to work with, so I’ve already been lucky in that regard. But there are still so many people I want to perform alongside, and lots of great young performers I want to work with too, so I’m looking forward to what comes.

What do you like about acting?
I think the thrill of performing is probably something that will last a lifetime. The more experienced performers are a great influence on me, but on the other hand, I also get new ideas from younger people coming up, when I see things they do, like, “Whoa, what was that,” so it’s a kind of an ongoing cycle. There’s no real end. That’s what I like the most, the constant motivation.

And last, could you tell us about your goals for this year?
Well first and foremost, from a work standpoint, I want to avoid getting inured (laughs)! But in more personal matters, I want to have an active lifestyle. I want to be athletic, and also try skydiving (smiles).

29 years old, born on March 13th, 1986 in Osaka Prefecture. Debuted in the 2005 drama Nobuta. After that, he was active on the stage in various dramas and movies. He took the lead role in the Crows Zero movie series, as well as Ace Attorney, TOKYO TRIBE, the NHK series Welkame, the taiga drama Taira no Kiyomori, Hana Moyu, and more.