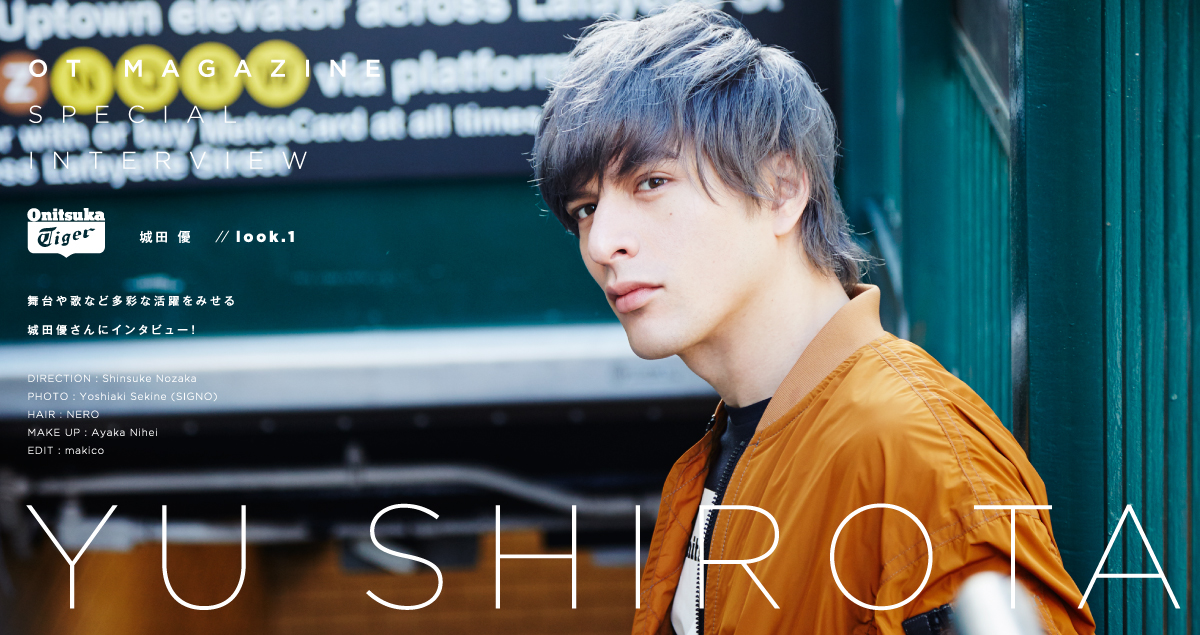 You can see him on stage, acting and singing.
An interview with Yu Shirota!

At 190 cm tall and with handsome features, Yu Shirota strikes quite the impressive appearance. His work spans the range of the entertainment industry, from actor, to TV star, to singer. In this interview we talk about his big shoot in New York! Check it out, we talk about lots of things, like his thoughts on New York and fashion. 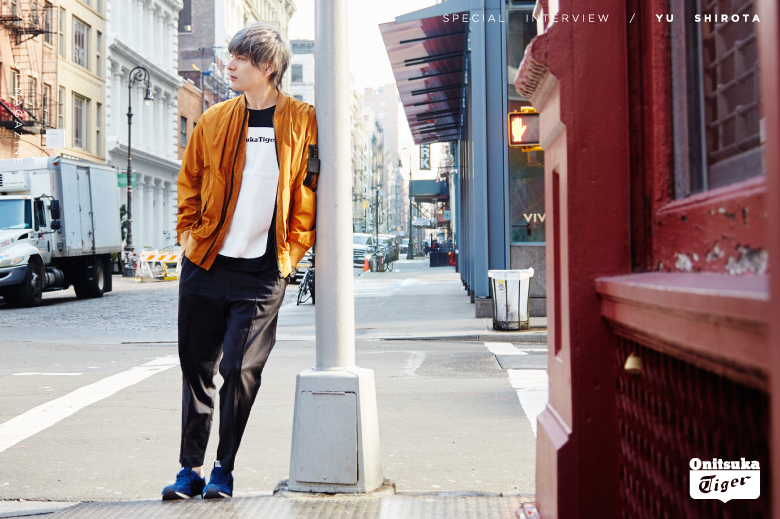 ── So, what was it like to walk the streets of New York in Onitsuka Tiger gear?

I usually don’t dress like this, but it actually felt pretty good. Like with the denim setup, I like it, I’d even walk around like this back home in Japan too! And the shoes too, very nice.

Oh, the shoes, definitely! They go with everything, and I like the nice leather material. Although they’re comfortable, they don’t really feel like sneakers. I think they would even work with a suit, they have a great stylish flavor. The khaki-colored jacket made an impression on me too; I don’t have anything that color. 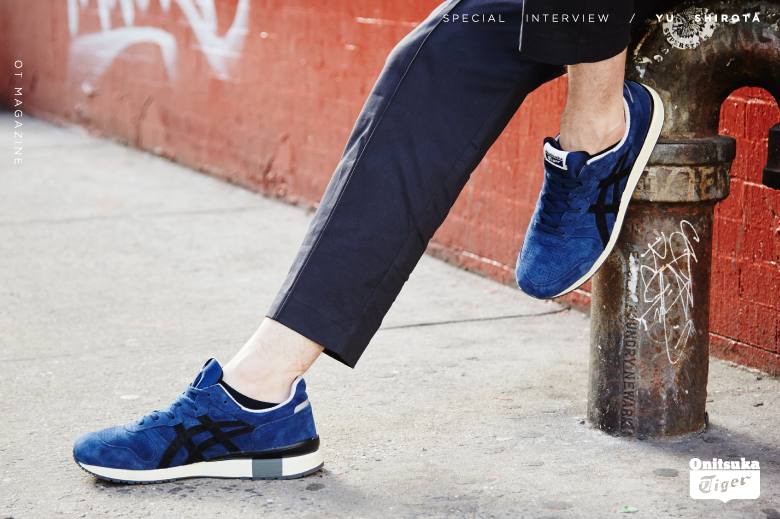 ── Yeah, they looked really good on you! I’m used to seeing you in black, so that was a nice change.

Well, yeah, I guess because of my age; since I’m in my 30s now, I’m focusing on a more sophisticated look that uses less color. I’ll ask my stylist to set me up with monotone outfits, and in my personal life I wear a lot of black too. But after wearing the stuff for this current shoot, that feeling kind of changed. Just yesterday when I was out shopping, I got something fluorescent orange; that was a first.

── Do you normally wear sneakers?

Last year I was mostly getting shoes to match my black and white wardrobe. Lots of leather shoes and boots. So I didn’t really have many opportunities to wear sneakers. But this shoot has really shown me how nice sneakers are. It’s inspired me to go out and get some. 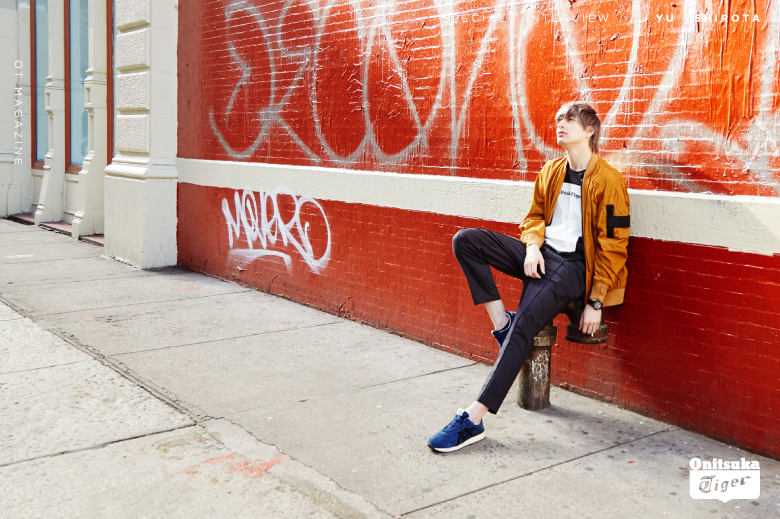 ── That’s great! So how was the New York shoot, by the way?

I was so happy to be coming here for a job! Of course I like Japan too, I feel at home there more than anywhere else. But when I got here to New York the scenery was awesome. Everywhere I look is so picturesque, the people walking on the streets are completely different; it’s a totally new feeling, lots of fun.

── I guess that also helped provide extra motivation for the work you were doing in Japan too.

Up until recently I had been working in an acting role, so I thought about that a lot (laughs). I was like, “Okay, just a few more days until New York!” It’s an overseas trip, but there was a lot I had to do before leaving. I was just thrilled to get the offer to do the shoot here. 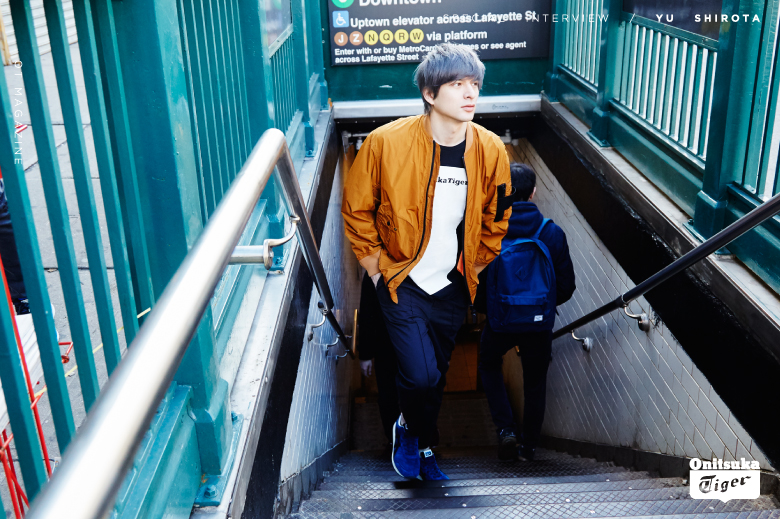 ── Yeah that’s pretty cool, isn’t it, going off to New York for a photo shoot.

Yeah, it’s awesome! It’s like slipping into a completely different dimension (haha). Overseas there are quite a few people my size, and lots of large-sized clothes and shoes, so it sort of feels comfortable, it’s weird. Also, I used to think my hair was something special, but there are lots of people in New York with even more impressive hair. Everyone has their own individual look, and they’re all living here together, it’s a real trip!

── How was the New York Onitsuka Tiger store?

It was really nice. I guess because it’s New York, it has to be even more awesome than the ones in Japan (laughs). I wanted to take advantage of being here in New York to check out their background, which was really interesting and made me like them even more. Also, I knew they were popular in overseas markets, but I think in Japan they still have a somewhat outdated image for a lot of people. So I’m happy to have a part in expanding their brand awareness. 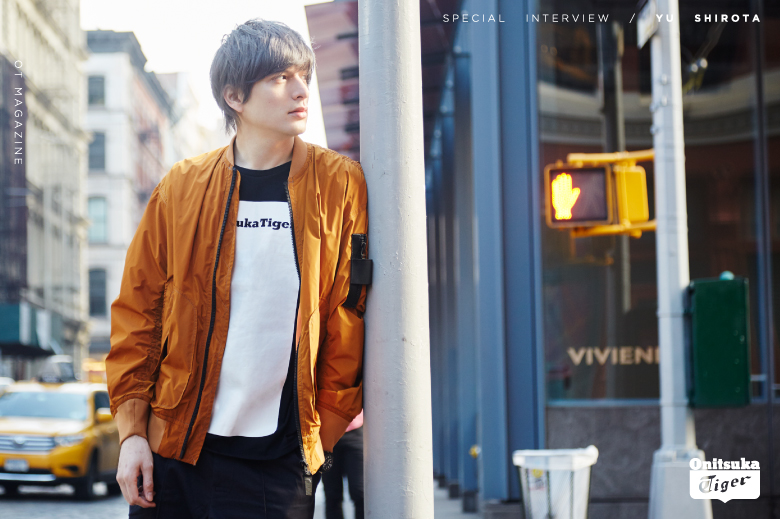 → In next month’s LOOK.2, Yu Shirota gives us a little character self-analysis! Plus we get to hear an interesting story about a certain private episode, as well as a surprising favorite thing of his, and lots more!

Yu Shirota made his debut in the 2003 musical Sailor Moon, and has been involved in a wide range of genres since. His TV drama appearances include Rookies, Heart of a Samurai, SPEC, GTO, and Yusha Yoshihiko to Michibikareshi 7 nin.

His big-screen appearances include A Good Husband, Arakawa Under the Bridge, and Akegarasu. His next movie appearance is in Ajin: Demi-Human, slated for release on September 30th this year.

On the theatrical stage, he played the role of the youngest Tod in the 2010 musical Elisabeth, and was awarded Best Newcomer by the 65th Japanese Agency for Cultural Affairs in the Drama category. He got his first leading role in 2016 for Apple Tree. In 2018 he’s set to star in Bullets over Broadway.

In music, he had his self-written CD debut with U. He’s scheduled to appear in a special concert this December, called 4 Stars 2017, along with Ramin Karimloo, Sierra Boggess, and Patina Miller.